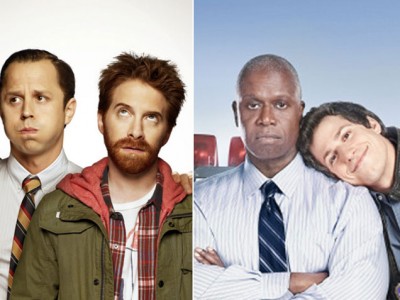 How could two shows exist in the same hour that oppose each other as comedically and morally as Brooklyn Nine-Nine and Dads?

Brooklyn Nine-Nine shines with promise, as Andy Samberg and Andre Braugher go head-to-head in this comedic detective show from the creators of Parks and Recreation. The show takes place in a detective precinct in Brooklyn, where Samberg is the great detective who doesn’t play by the rules, who clashes with Braugher, the new captain who goes by the book. It sounds cliche, sure, but the two leads bring a comedic spirit that defies such cliches, and  that could make for a wonderfully dynamic duo later in the series’ run.  I’d say only about 15% of the jokes fall flat in the first episode, which is pretty impressive for a pilot, and the supporting cast (made up of Terry Crew, Melissa Fumero, and Joe Lo Truglio, among others) brings a nice variety and energy that could make this a really tight ensemble show in the vein of Parks and Rec. These are characters who are fun, but not over the top. Silly, but not too silly. If you like Parks and Rec, you’ll definitely want to catch this. I suggest you give this show a look-see. Even those who don’t consider themselves huge Andy Samberg fans might see themselves cracking a smile every now and then.

Dads, on the other hand, is horrid. From the creators of Family Guy and Ted, the show stars Seth Green, Giovanni Ribisi, and some other actors who should be reconsidering their career choices. This show has been getting some “controversy” over some of its offensive humor. And yes, there is some of that here, that’s a given with the people who are running it. But that wouldn’t really matter as much if the show was actually funny or clever or something I didn’t roll my eyes at every 5 seconds. My God. Punchlines you can see from a mile away, a studio audience laughing after EVERY SINGLE LINE (I’m not exaggerating), not to mention really, really poor production values. It doesn’t seem like any care even went into the production of this show. Dads is the sitcom equivalent of fast-food; pre-packaged, with no value, and it leaves you with a sick feeling in your stomach afterwards.

So if it hasn’t become abundantly clear, I recommend you see where the comedic promise of Brooklyn Nine-Nine is going, and don’t give Dads any attention whatsoever; the more we ignore it, the better.

Brooklyn Nine-Nine and Dads are both available to watch on Hulu, and air on FOX Tuesday nights from 8pm-9pm/ET.

2 thoughts on “A Piece of My Mind: FOX’s Tuesday Night Polar Opposite Comedy Hour”