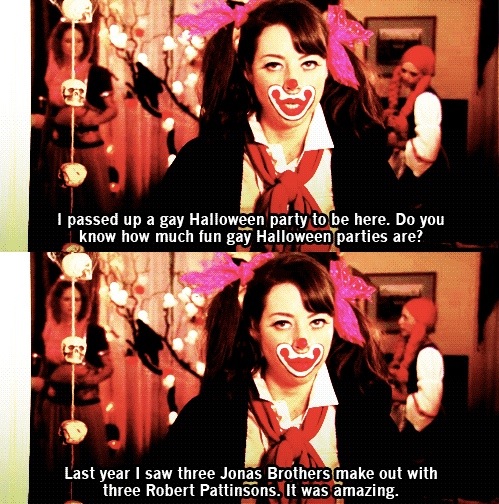 This ICYMI doesn’t actually have that much to do with Halloween. I just really wanted to write Halloweiner. I’m an adult, I swear.

-This happened last weekend, but Marcia Wallace (of The Simpsons and the Bob Newhart Show, most notably voicing Edna Krabappel on the former) and Lou Reed (I am not explaining who Lou Reed is because you should know that) passed away, at the ages of 70 and 71, respectively. The Simpsons has responded by voicing their grief and retiring Mrs. Krabappel, and the world has responded by putting Lou Reed songs on repeat on rainy days and moping in the coolest way possible.

-NBC has picked up a new comedy from Golden God Tina Fey and her 30 Rock co-conspirator, Robert Carlock. The sitcom will star Ellie Kemper of The Office, Bridesmaids, and my fantasy brunch lineup. So basically this show is our next great comedy and I am counting down the days.

-Some guy from Vulture who really hates Banksy went around New York and ranked different Banksy pieces, because that makes sense. I’m not really a big Banksy fangirl but did Banksy kill this guy’s dog or something? I feel like pop culture writing should be a little more impartial than that, but then again, I asked Ben to write our How I Met Your Father Quickie and he hates HIMYM with the fire of a thousand suns, so.

-Heidi Klum was completely unrecognizable this Halloween as an old lady, because that’s a costume that insanely hot German supermodels can get away with. (I kid. I actually love Heidi Klum and her epic Halloween costumes.) More on celebrity Halloween costumes later, friends.

–Ender’s Game comes out today, amidst controversy over author Orson Scott Card’s inflammatory, anti-gay remarks throughout his career. This movie is going to hit a lot of people’s nostalgia nerve, though, so it’s still probably going to make a ton of money.

The Wolf of Wall Street, Scorcese’s new Leo vehicle featuring Jonah Hill and The Mother, was initally going to be shoved back to a January release date, but scored a prize Christmas Day opening so as to put it back in the running for the Oscars. This doesn’t bode well for Paramount’s Jack Ryan: Shadow Recruit, a Tom Clancy reboot starring Chris Pine, which got bumped to January 17. Whoops.

–Lady GaGa and Josh Hutcherson will host SNL – separately, since GaGa will pull a Timberlake and serve as both host and musical guest to promote her new album, ArtPop. She’ll host on November 16, while Hutcherson will host on the 23rd. Here’s hoping he gets a better episode than his Hunger Games lady, J-Law, who struggled with awful material during her first hosting gig.

-A mom who thought it would be weird and adorable to dress her kids as Jesse Pinkman and Walter White (not for Halloween, just for a family photoshoot) has been attacked and hate-mailed after Aaron Paul Instagrammed the photo and it went viral. I don’t really see what the big deal is. These kids don’t know what meth is, they just know one of them is wearing a funny hat.