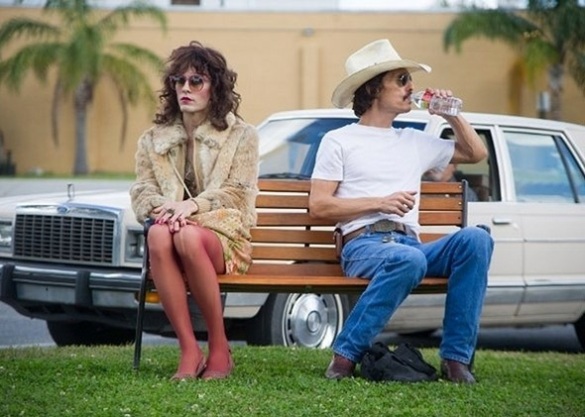 As we come closer to the Academy Awards on March 2nd, we’ll be posting short profiles of each Best Picture nominee, attempting, in our own ways, to not only sum up what the movie is about, but why we believe it scored one of the nine coveted nominations, and why it could possibly take home the big prize come Oscar night. Enjoy!

This Oscar season, we’ve been dealing with a lot of heroes and anti-heroes, all of whom are struggling against something to survive. In Dallas Buyers Club, Jean Marc-Valeé’s film about the very real Ron Woodroof, we watch our protagonist go from anti-hero to hero, just over the course of two hours.

Despite some glaring anachronisms (actually, you didn’t need a passport to cross the US-Mexico border until 2008, and those Ray-Bans looked awfully new, but whatever), Dallas Buyers Club paints a painfully real picture of a man stricken with a disease he doesn’t understand, who then does everything he can to help himself and others fight for their lives. Ron Woodroof (Matthew McConaughey), a homophobic, bull-riding, macho man electrician, hasn’t been feeling so hot, and when he wakes up in the hospital after passing out, he’s told by Dr. Sevard (Denis O’Hare) and Dr. Eve Saks (Jennifer Garner) that he’s HIV positive, and has about 30 days left to live. Keep in mind that this is all happening in1985, when HIV and AIDS were considered a “gay man’s disease,” which sends Woodroof deep into denial. Though he steals AZT to keep himself alive, it just leaves him worse off, and during his second hospital stay, he meets Rayon (Jared Leto), an HIV positive transgender woman – and you can imagine how well that goes. After struggling to find AZT illegally in Mexico, Woodroof starts to realize that the AZT is actually making him sicker, and with the help of Eve and Rayon, he works around the system to provide HIV-positive patients with a cocktail of vitamins (most of which aren’t FDA-approved) that actually DOES help, forming a $400/month “Dallas Buyers Club.” Over time, Woodroof becomes accepting of a homosexual lifestyle, coming to truly care about Rayon and his clients, and finding himself truly devastated over Rayon’s eventual death. Though his lawsuit against the FDA is ultimately unsuccessful, Woodroof lived for a full seven years after his 30-day diagnosis and helped a lot of suffering people along the way.

This is the kind of film where the film itself is good, but the performances within elevate it to an entirely different level. Matthew McConaughey as Ron Woodroof is nothing short of transcendent. He lost a considerable amount of weight for this role, rendering him nearly unrecognizable (a weight loss that is still visible in both The Wolf of Wall Street and True Detective), seemingly losing weight throughout the film as his character continued to suffer from the effects of AIDS. Plenty of actors have lost weight for a role, but McConaughey’s gaunt, emaciated face transforms him, as does the sheer desperation of his performance. Woodroof is a man who will struggle to survive at any cost, yet is also a man whose own prejudices are proven wrong over time. You can’t talk about a transformative performance in this film, however, without talking about Jared Leto as Rayon. Leto, after a five year break from acting, delivered one of the most talked about performances in years, with no eyebrows or body hair to speak of and 30 less pounds on his already slender frame. Leto reportedly refused to break character during filming, but it certainly served him well. His performance is sheer perfection and all-consuming, with no hint of Jordan Catalano or that blonde guy who got his ass kicked in Fight Club. You only see Rayon, impossibly skinny with a huge attitude, fighting for her own life as well as the lives of hundreds. Rayon’s swan song, where she applies makeup and pleads not to die (in which you see just how terrifyingly thin Leto became), is one of the most captivating onscreen moments of the year.

It’s nice to see the film itself nominated – it’s a well-written, touching film about the strength and compassion of the human spirit – but the major victories will likely be for Leto and McConaughey (who, if he wins, will hold the distinction of being the first Oscar winner to have ever been arrested for playing the bongos naked while he was really stoned). That being said, this movie is Academy catnip. It’s based on a true story, focuses on a historic human rights issue, and both of the lead actors dropped a ton of weight for their roles. Will it win? No way. Does it deserve to be there? Sure. If nothing else, this film gave us two unforgettable performances, and for that, it deserves to be recognized.