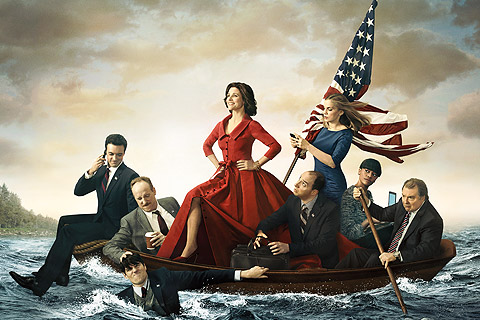 I think Veep succeeds as a great TV show because it’s able to be the least political show about politics on television right now. Yes, the main plot-line for Season 3 is Selina Meyer (Julia Louis-Dreyfus) and her team beginning her “pre-campaign” for the Presidency, but this show has always been about the people wearing the suits, rather than the suits themselves. We laugh not because of the issues they’re handling, but how they are being handled by these incompetent, selfish politicians. Veep is the latest in a line of shows that have an “abortion” episode, and is likely the only show that doesn’t take a stance on the issue, mainly because the characters don’t really care about it; they just need to figure out which side makes them look better.

We’re two episodes into this season, and I can tell you I’m extremely excited about where we’re going, mainly because I think we’ll be getting some more chances to get Selina out of the rut she’s been in for the first two seasons. Part of the appeal and the freshness of the first season was seeing the forever persevering character of Selina Meyer, but my worry was that it would just be episode-after-episode of Selina constantly trying and failing, trying and failing. But now, she has a clear and focused mission ahead of her; the Presidency. And of course there will be stumbling blocks along the way (how can there not be?), at least there’s some sort of light at the end of the tunnel for Selina Meyer.

But boy, this is not going to be an easy tunnel, as evidenced in this week’s episode “The Choice.” POTUS has officially changed his abortion status to “pro-life,” so Selina has to make her own choice; betray women everywhere and go pro-life, or betray the President and go pro-choice. And again, all morals and rights are thrown out the window, this is all about political power-play, with no ethics present in the room. Using ridiculous charts to figure out their strategy (Thanks for that “fruit diorama,” or whatever that was, Gary), it all ends with Selina giving a fantastically vague, nonsensical response on Good Morning America. She may as well have said nothing.

Speaking of saying nothing, we have a side-plot this season of the fantastical adventures of everyone’s favorite “sex wasp” Jonah Ryan (Timothy Simons). Jonah has gotten himself fired from the White House for starting a political blog, and now is rebelling against the system by ingeniously starting a political…..vlog. Yeah, there we go. He calls it “Ryantology,” and it’s sure to backfire amazingly over the season. Or it could erupt in Selina’s face like the comedic counterbalance to House of Cards that we all know this show really is.

Selina has some tough competition ahead of her. She has to make a decision of who her campaign manager will be, Amy (Anna Chlumsky) or Dan (Reid Scott). Mike (Matt Walsh) is on his honeymoon with his new wife (Kathy Najmy), who is a reporter, which cannot be a good sign. But at least Gary (Emmy-winner Tony Hale!!) will be there with hand wipes to help her out. It’s hard to say whether Selina will come out of this all in one piece, but at least we’re all in this together.