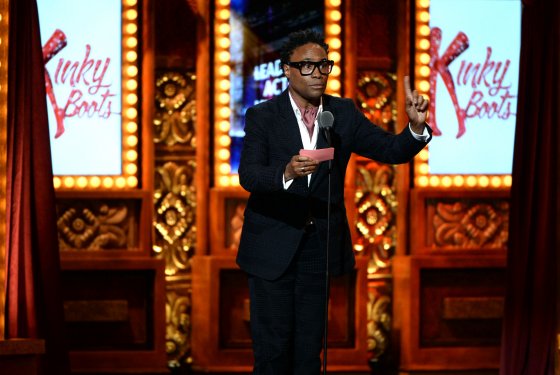 Last night, the Tony Awards committee made the decision to remove the Sound Design categories from the annual awards celebrating Broadway, a figurative slap in the face to an essential design component of the theatre. Sound designers create the soundscape of a show, and a good sound design can make or break a show. This award was first introduced in 2008, and showed a huge progression for the Tony Awards, showing that they were in touch with the artists who are creating the shows of today. But by removing this category, something is becoming evidently clear about the Tony Awards organization: they’re completely out of touch with the theatre world. And this leads me to my next point: should we even be watching the Tony Awards anymore?

Say what you will about this year’s ceremony, but there was something a little bit fishy with the proceedings, mainly in the ratio between performances from shows, and awards. For the first time, I believe ever, the Tony Award for Best Original Score was presented during a commercial break. They started doing this with Best Book a few years ago too, but why do the producers of the ceremony think no one is interested in who wrote the musicals they’re watching perform tonight? There are certainly lots of young “Last 5 Years” fans out there who would have loved to see Jason Robert Brown win an award, but there clearly wasn’t enough time for that category during the telecast. The only people who won awards during the telecast were actors, directors, and producers, with not a writer, choreographer, or designer in sight.

So who did we get to see perform on the telecast that deserved this precious broadcast time? Well, Wicked is ten years old, so we should see them perform, right? And Sting has a musical coming in later this year, so let’s see him sing a song completely out of context. And the musical “Finding Neverland” is MAYBE coming to Broadway, so we might as well give them a number too, starring completely-relevant-singer Jennifer Hudson, no less! Meanwhile, we also got performances from “If/Then” (because Idina Menzel is in it), “Rocky” (which lasted all of two seconds), and “Bullets Over Broadway,” all three shows that weren’t nominated for Best Musical, essentially giving less time to showcase the Best Musical nominees, and taking away time from the aforementioned designers/writers not being honored during the telecast.

While there is certainly an issue with the shows being created today, how originality is sparse in the Broadway musical, how shows are either revivals or based off of a familiar commodity, can you blame them when the awards honoring them pretty much have that same mind-set? If the Tony Awards are supposed to be a celebration of the year on Broadway, then that’s what they SHOULD be, rather than celebrating the celebrities who are tangentially associated with Broadway like Sting and Jennifer Hudson. It seemed the producers were more interested in future shows, than honoring the shows that were actually here this season. And there are certainly other issues to take with the awards as well, including their complete lack of respect or regard for Broadway Plays, an area which the broadcast has never really been able to get right. But the fact remains, the awards this year didn’t seem to take a liking to the YEAR ON BROADWAY.

The question then becomes; are we celebrating theatre across the country, or theatre in New York? Sadly, you can’t have your cake and eat it too, which is what the Tonys are attempting (and failing) to do. To truly succeed, the Tony Awards need to truly embrace the shows that they have, rather than the shows they’re going to have. Celebrate the season, celebrate each other, OR celebrate the possible ripple effect that Broadway has on the rest of the country. Give the Regional Theatre Tony to a company that ISN’T FROM NEW YORK (Sorry, Signature Theatre, but that was just odd this year). If you’re going to celebrate Broadway, celebrate the Broadway season, and acknowledge who is making these shows, show the world who the writers and choreographers and designers are. There are kids out there who love to hear the words of a Tony-winning sound designer, to hear that they could do this too when they grow up. Theatre is full of possibility, and people should know that. Right now, kids know that if you’re not an actor, the Tonys don’t really like you that much.

My go-to thought is that if the Tonys stay a New York affair, why not just put them on PBS, instead of national television on CBS? But then the story I always thinks about is that of last year’s Tony-winning Best Actor Billy Porter, talking about washing dishes in his home in Pittsburgh as a young kid, and seeing the performance from “Dreamgirls” on the Tony Awards. Seeing that performance inspired him to take the journey he took, and it’s stories like that that show the power of these awards. And I’m starting to think that the Tony Awards themselves are starting to forget that entirely.

For those interested, there is an online petition to reinstate the Sound Design Tony. The link is below.
(http://www.thepetitionsite.com/470/217/554/reinstate-the-tony-award-categories-for-sound-design-now/)