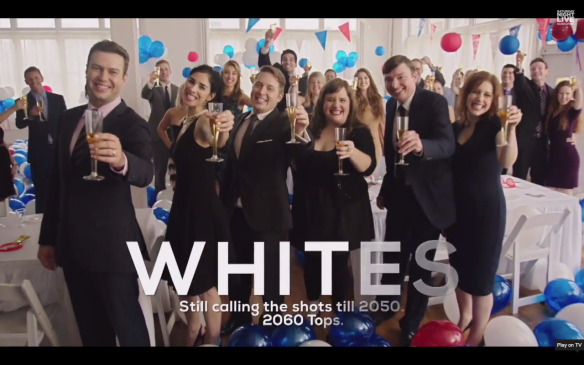 While not completely laugh-out-loud, this week we at least got some laugh-out-loud sketches from the SNL crew (including one sketch which was just out of this world ridiculous). The cast and writers are getting a bit more comfortable, and a lot of the pacing issues from last week have been cleaned up. A lot of my fears from last week’s premiere have been slightly (oh so slightly) alleviated this week.

And of course, the lovely Sarah Silverman was our host for the evening! I’m a big fan of Sarah’s comedic style, and I’m glad that they just let her do her own thing during the monologue, a mix of stand-up, audience participation, and interacting with her past-self via video clips. And at least it wasn’t a damn song. But how was the REST of the episode? Better than last week, for sure. I can give it that…

Best Sketch of the Night

“Whites.” I’m going to have to go with “Whites.” A ridiculously outlandish sketch that I never would’ve expected from this show. It’s nice to know that there’s still a little bit of comedic edge to the proceedings here at SNL, and a sketch like this really elevated the episode for me, especially with lines like “For these final years of white dominance, we’re gonna soak it all in.” Jesus, what a great damn sketch.

Worst Sketch of the Night

I have to go with the weird sketch set on the River Cruise. None of the jokes really worked for me, honestly. The premise was super thin, and you could see where things were going from a mile away. An extremely lazy and phoned-in sketch. This was really the only sketch tonight that had zero redeeming qualities, so that’s saying something I guess.

What Else Happened Tonight?

-Really great use of Bobby Moynihan to elevate otherwise mediocre sketches. His Benjamin Franklin was the saving grace of the Joan Rivers Heaven Sketch, and his “reveal” in the Proposal sketch was priceless. I’m glad that he made some wonderful appearances tonight.

-LOTS of Kenan Thompson in the first half of the evening. My favorite was his performance as Reese De What in the “Forgotten TV Gems” sketch, which probably comes in as a close second for Best Sketch of the Night. Kenan has a great sense of playing the oddball and the confusion of a sketch. It’s a delight to watch, and he made that sketch greater than it already was.

-There’s a sketch that you’ll probably see in your Facebook newsfeed a lot this week (with good reason) called The Fault in Our Stars 2: The Ebola in Our Everything. It’s a great sketch as well, and probably #3 for the night in terms of greatness. Taran Killam was the MVP here, with wonderful reactions to such a horrible situation. And the wonderful “reviews” for this fake film, such as “I laughed. I panicked. I mostly panicked.”

How was Weekend Update?

Not great, but better! As per the general theme of the night. Michael Che was certainly more comfortable this week, and got some great jokes in (“Who goes to Texas AND Africa?”). The Al Sharpton section wasn’t too strong, honestly, but I enjoyed Kate McKinnon and Sarah Silverman’s band, Garbage and Her. It was a great silly song and it added some ridiculousness to the night. I also enjoyed the cute little rapport between Colin and Michael about what words/terms each of them can and can’t say. They’re getting better slowly but surely, I can sense it.

And the Musical Guest?

Not much to say about Maroon 5. Another excuse to let a musician invade a bunch of sketches.

Any Other Memorable Moments?

-The cold open sketch was fine, some humorous jokes here and there. Jay Pharoah’s Obama impression felt a bit off tonight, maybe that was just me.

-Seriously, I loved Benjamin Franklin laughing at these jokes with a complete misunderstanding of their true meaning.

-A classic Ron Burgundy-esque moment when Kenan as Al Sharpton said to Colin during Weekend Update, “Who tells the jokes,” as a question, rather than a statement.

-I would love to listen to the song “You Cheated On Me, And Then You Gave Me Fudge.”

-The Bennett/Mooney sketch was very strange. I liked it though, as I do most of their work.