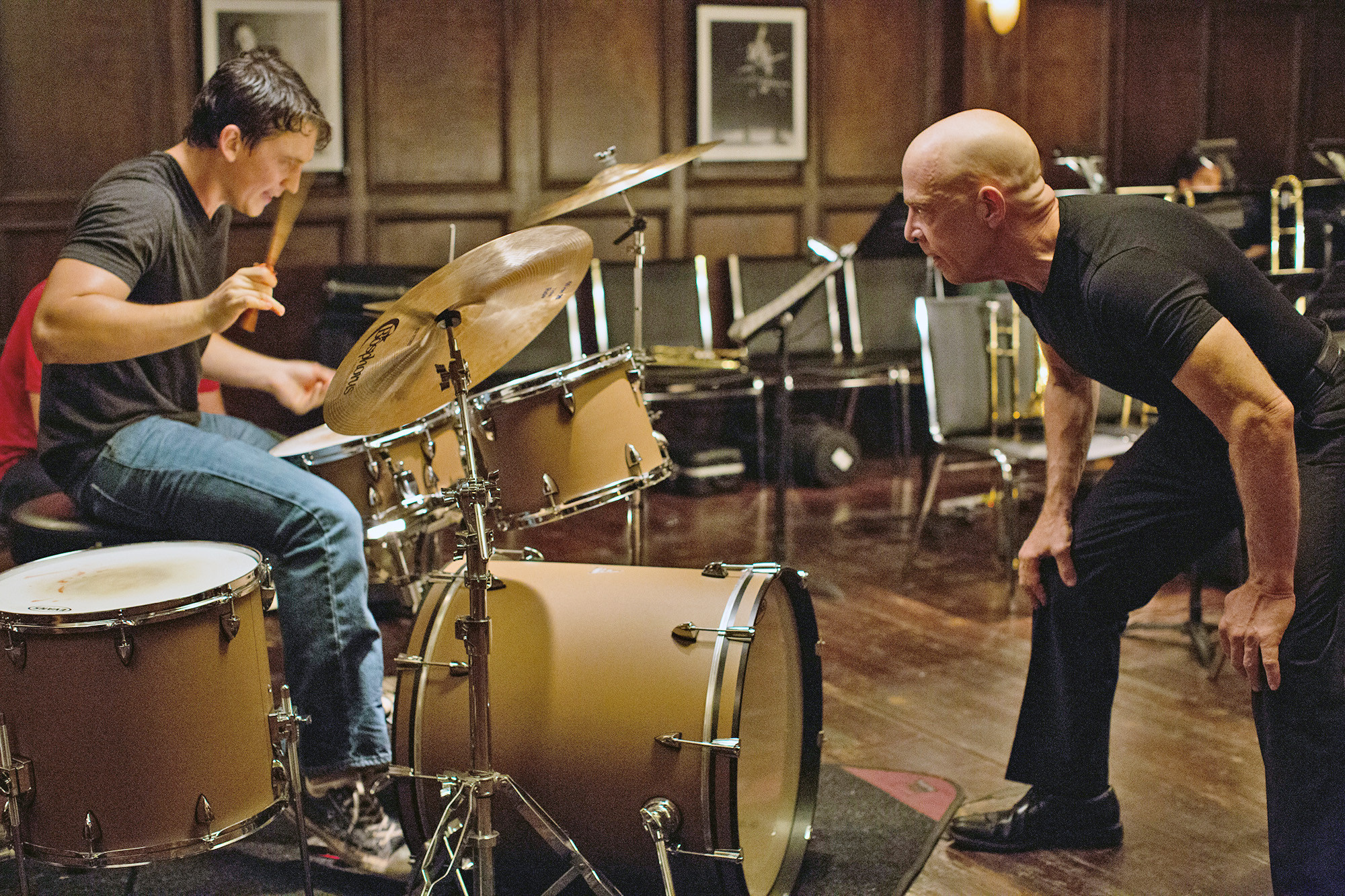 As we come closer to the Academy Awards on February 22nd, we’ll be posting short profiles of each Best Picture nominee, attempting, in our own ways, to not only sum up what the movie is about, but why we believe it scored one of the eight coveted nominations, and why it could possibly take home the big prize come Oscar night. Enjoy!

I won’t lie – Whiplash is an intense and stressful movie. This should come as no surprise, since the film focuses on an obsessive music student, Andrew Neiman (Miles Teller) striving for perfection while studying under a sadistic teacher (J.K. Simmons) who drives him to the absolute breaking point. This is meant to be stressful – both for Neiman, and for us, but the film isn’t simply an uncomfortable two hours. (Though it is.) It’s a destruction of the teacher-student genre, a fable on the concept of “hard work,” and an exploration of whether or not perfection can ever really be achieved.

Whiplash, a beautifully edited and shot movie, opens with a particularly striking scene – Neiman, drumming alone, is discovered by a tall and mysterious man, who at once asks him to play and admonishes him for assuming he could play. That man, of course, is Terence Fletcher, as played by J.K. Simmons, and he runs a particularly prestigious band within Shaffer Conservatory, where Neiman is a freshman. Though Fletcher eventually accepts Neiman into his band, his methods are unorthodox at best – usually culminating in a series of slaps (a particularly harrowing scene) or a chair being tossed at a band member’s head – and Neiman gives it his all, ditching a girlfriend and practicing for hours on end. Things come to a head (a car accident, a physical attack, and a flubbed concert – you know, the usual) and Neiman ends up testifying against Fletcher and getting him fired from the conservatory, though the two have a mysteriously friendly meeting just a few months later wherein Fletcher invites Neiman to play with him once more. As you might guess, it’s never that simple. Fletcher strands Neiman without sheet music, but it’s in this moment that Neiman shines, stunning with a nine-minute drum solo that finally, maybe, begins to earn Fletcher’s approval. (We don’t really know where this goes – this movie almost has to end ambiguously to avoid veering into something saccharine.)

There are two things that make Whiplash what it is, and I’ve already mentioned one, which is the striking, quick cinematography that perfectly complements the constant patter of the jazz drums. The other is, of course, the performances. This is essentially a two-man movie, and Simmons and Teller carry it so beautifully, bringing two independent energies to the table. Teller, a drummer throughout his life, performed much of his own music in this film, and was clearly up for a challenge – those slaps I mentioned were real, and he left his “pint of blood” in the form of, well, actual blood on drumsticks and cymbals. It should come as no surprise that Simmons, the current frontrunner for Best Supporting Actor, is the absolute standout here. A character actor by trade, Simmons has been everyone’s favorite “That Guy” for years, popping up in huge movies like Sam Raimi’s Spider-Man series and smaller ones like Jason Reitman’s collection of films, but this film finally gives him a chance to not only shine, but try something completely different and utterly terrifying. Simmons’ Fletcher is absolutely one of the scariest movie villains of recent history – even when he’s smiling at Neiman, you can feel the careful, sinister trap being set underneath. He’s a revelation, and deserves the Oscar – and since he’s won basically every award leading up to it, he’ll win that too.

But, that being said, does this movie deserve to win Best Picture? It would be a different choice, and an interesting one, and we know the Academy doesn’t much go for that (remember The Social Network?), but it still feels a little too narrow to really be the best picture of the entire year. Yes, it’s making a grander statement, but ultimately, it’s a particularly intense underdog movie with an extremely narrow focus. It’s a good film, and maybe even a great film, but not the best. Still, Simmons will inevitably be honored, and writer-director Damien Chazelle couldn’t have asked for a better film debut – I can imagine that actors will be lining up to be challenged by him just as his characters begged to be tormented by Fletcher. This film, in the end, asks whether that kind of torture is worth it, and while I’m still tempted to say no, the story of it certainly makes for a compelling two hours.