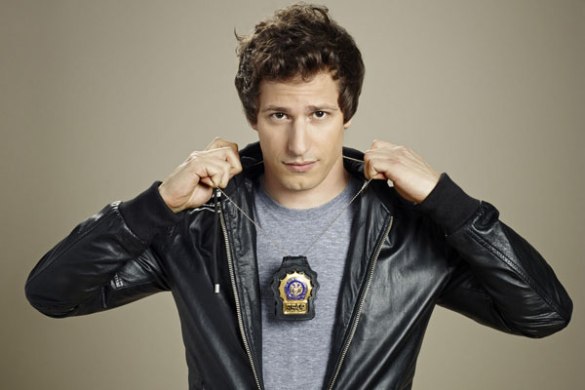 Former SNL actor, Current Brooklyn Nine-Nine actor, and Forever Lonely Island comedian Andy Samberg is tapped to host this year’s Emmy Awards. Samberg, who technically could also be a potential nominee this year, is a great departure from the usual “Old White Guy” host, and a move toward the fresher “Young White Guy” host category. Either way, expect some ridiculous humor, a lot of nerdy rapping, and much more silliness than usual at the Emmys. This will be one for the ages.

END_OF_DOCUMENT_TOKEN_TO_BE_REPLACED

We’re excited too, Ellie Kemper! Your new show, The Unbreakable Kimmy Schmidt, is now on Netflix, and I’m planning on passing this snowy, cold day with Kimmy, Jenna Maroney and a bag (or six) of PopCorners. (There’s also a new Aziz Ansari special up today – just a friendly PSA). That all being said – what happened this week?

-Speaking of funny ladies I’m a big fan of, Jenny Slate is getting her own show on FX, which she’ll be cowriting with Gillian Robespierre, her collaborator on Obvious Child! If I’m being honest, I kind of want it to be a spinoff about Mona-Lisa Saperstein’s life, but I’ll settle for just about anything.

-There’s a new Avengers: Age of Ultron trailer out, which offers us a glimpse at Vision. Google him if you want to know the deal, because I tried and comics are unexpectedly complicated, so I’m not gonna try.

-This week in hilarious Sony gaffes: sources are claiming that Amy Pascal can’t move into her new office, previously occupied by Seth Rogen and Evan Goldberg, because the “pot stench” is so overpowering. Seth Rogen, predictably, shot back. You know what the obvious solution is here? Lock them in that office with a whole bunch of weed. Problem solved.

-The mass exodus from The Daily Show continues, as do my tears. Samantha Bee will also be leaving, but NOT for the show she’s co-running for the channel with husband Jason Jones – she’s actually getting her own Daily Show-type thing. Guess I’ll be, um, watching TBS now. This is a weird feeling.

-The Oscars are considering going back to the five Best Picture nominee model because after the whole Dark Knight snub controversy, they have failed to nominate, you know, any blockbuster movies (American Sniper aside). Well, that was a fun exercise.

-Now that Netflix has scooped up some Emmys and Golden Globes, they’re gunning for an Oscar or two – they paid $12 million for Cary Fukunaga’s film, Beasts of No Nation, which will focus on child soldiers and star international mom-crush Idris Elba.

-Quick movie casting news! Dan Stevens, formerly known as the guy who died on Downton that made everybody very sad, will be the Beast to Emma Watson’s Beauty in, well, Beauty in the Beast. Also, Jennifer Lawrence and Sir Stevie will be teaming up for a film about Lynsey Addario, who’s served as a war photographer in multiple combat zones – and as we’ve seen in, I don’t know, all of the Hunger Games films, J-Law’s pretty solid in combat.

That’s all for this week! We’ll, uh, write some things this week. For sure. Definitely.