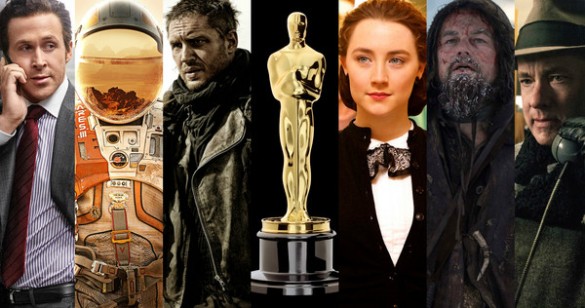 N: Well, here we are. The Superbowl of Movies is back, so of course, we’re here to pre-judge it, make a bunch of predictions, insist they won’t come true, and then I’ll cry about Jon Hamm. He’s not even nominated, but that’s just something I do from time to time.

B: Take your Jon Hamm sadness and stick it up your Trumbo, THIS IS THE OSCARS, PEOPLE. Will Sylvester Stallone get some Oscar love? Will Leonardo DiCaprio yet again be torn asunder at the mercy of the Oscar Gods? Who in the hell will actually win Best Picture? In what is one of the most unpredictable races in recent Oscar history, it’s time for us to make our presumptions, and pick who should/will win this Oscar Sunday!

N: Unlike the Lead Actor categories, these are a little trickier to call. Supporting Actress might end up with Kate Winslet, who took home the BAFTA (and despite my total contempt for Titanic, it would be adorable to see Kate and Leo win together), but it’ll more likely go to Alicia Vikander, who may well end up getting an Oscar for having a really good year/actually for Ex Machina, far and away a better film than Danish Girl. (Remember when Melissa McCarthy won an Emmy for Mike & Molly and everyone just quietly accepted that it was really for Bridesmaids? Right.) Supporting Actor… ugh, Stallone. I don’t want it to be Stallone. But it’ll be Stallone. Go Philly, I guess, anyway.

B: The safe bet is Vikander, who totally stops The Danish Girl from being a total trainwreck of a feature, but I wouldn’t be surprised if the steal is actually from Rooney Mara for Carol, a film that was shortchanged for Best Picture/Best Director this year, and could easily be seen as a big win for the film at large. For Supporting Actor, I could honestly see it going to any of the five, pretty darn good nominees. Count me in for Stallone too, but this is a good category to keep an eye on for the rest of the night. If Hardy, Bale, or Ruffalo win, that could be an early indicator that their respective film could win Best Picture. And if Mark Rylance wins, I’ll just be the happiest.

Final Prediction: Nina and Ben for Stallone, Nina for Vikander, and Ben with Mara for the steal.

B: In a pure and just world, George Miller would take home the gold for directing the crap out of Mad Max: Fury Road. He created a gorgeous and thrilling adventure of a film, but alas, it was not meant to be. It looks like Alejandro G. Iñarritu will likely take Best Director for the second year in a row for his overwrought epic The Revenant. But damn if I’m voting with my heart this year for ole Miller.

N: In terms of “heart’s desire,” I’m torn on this one. I really want George Miller, surprise feminist hero and longtime badass, to win, but like, I also would die of pure joy and weird if Adam McKay, who directed fucking Anchorman, won an Oscar. That being said, it looks like the pretentious dingbat whose main supporting actor actually choked him out on set for being such an asshole is going to win, so like, congrats, I guess, Iñarritu. I hate all of your movies, you jerk. Go whack off and watch your dumb movie in a temple.

Final Prediction: Ben and Nina want Miller and McKay to win, respectively, but realize the futility of this and are aware that Iñarritu will win.

N: In terms of Adapted Screenplay, this seems like a lock for The Big Short, which turned a terrifyingly dense Michael Lewis book about hyper-confusing bank fuckery actually digestible and — shockingly — fun, right up until that heart-stopping footnote that ends the film. As much as I would die to see Pete Docter and crew take home a writing Oscar for Inside Out, which made me cry more than anything else ever (true story: I tried to watch Inside Out on a plane trip after having seen it THREE times, but was forced to turn it off out of sheer embarrassment when I started crying BEFORE ANYTHING SAD EVEN HAPPENED), but I think Spotlight will probably take home its sole Oscar in this category.

B: Can’t really argue with either of these choices. I’ll be extremely surprised if something else occurs in these categories, so have at it!

Final Prediction: The Big Short and Spotlight. That’s it.

N: We wouldn’t normally cover this, but like, lololol, it’s for sure going to be Emmanuel Lubezki for The Revenant, which will mark his third win in a row and make history. The Revenant was mostly a long, sighing fart that lingered for way too long, but it sure did look pretty.

B: GIVE ALL THE TECH AWARDS TO MAD MAX. End of story.

N: And speaking of locks, my jaw would not only drop but fall off of my fucking face if Inside Out doesn’t take this home. Pixar’s winning record is remarkable, Inside Out is one of their most critically adored movies ever (which is really saying something), and many think it should have flat out been nominated for Best Picture, so the place to rectify that is here.

B: While I wish there was a scenario where this would go to Anomalisa, Charlie Kaufman’s haunting stop-motion masterpiece, there’s no surer lock than Inside Out here. Well deserved, of course. Lock it in.

Final Prediction: Inside Out, duh.

B: I can’t think of a scenario where Leonardo DiCaprio and Brie Larson don’t win their respective categories. They’ve been racking up precursors all Oscar season, and unless Charlotte Rampling pulls off a surreal steal, these are your two winners, folks.

N: Dude, we have to give Leo the Oscar. I would be happier if he had won for basically any other movie he’s made over the past decade AND, if pressed, I would say Tom Hardy was actually better than Leo in The Revenant — but I am honestly concerned about what kind of movie he would make next if he doesn’t win. Like, I’m concerned for his soul. As for the extremely lovely Brie Larson, who not only gave a stunning and heartbreaking performance in Room but has apparently been charming press members right and left (in one podcast, someone said she remembers every single person’s name, which is something they’ve literally never seen happen in an Oscar press room), so she’s, thankfully, as sure of a sure thing as a thing could be.

B: Spotlight. The Big Short. The Revenant. These are three films that were released last year, and are far from the best of the year. But here we are, your three-way race to Oscar glory.

N: You know that moment in Harry Potter when Harry is getting Sorted and he’s going, “not Slytherin, not Slytherin” in his head to ask the Sorting Hat to just put him literally anything else? That’s how I feel about The Revenant probably winning Best Picture.

B: But there’s that hopeful feeling that I think things will shift in the other direction, and I’m going to go and say that The Big Short will be our big winner. After winning the Producers Guild Award, The Big Short proved that it has some sway in the Academy, and I think it’s a relevant enough film for this moment, with enough stylistic flourishes, that it could definitely be the movie of the moment. That’s all I can say right now. No one really knows anything.

N: I think Jon Hamm will probably win Best Picture just for living his life every day like the champion he is. But really, for variety’s sake, I’ll go with Spotlight, which was our first real frontrunner this year and may well end up being our last.

B: Well, tune in this Sunday to see what really happens. If The Revenant wins Best Picture, be sure to listen for my blood-curdling scream of sadness!

N: BEN, I WAS GOING TO MAKE THAT SAME JOKE!! But really. With Ben in Chicago and me in Philadelphia, we’ll be the screams heard round the East. We’ll be tweeting at @ninastarner and @TheBenKaye, and if you REALLY want to stalk me in particular, download the Bustle app to see my live content coverage there! (Shameless plugging is fun.) We’ll also be back on Monday to discuss whatever the hell happens, and both of us will be finishing up our Best Picture Profiles… right up until the Oscars, frankly.