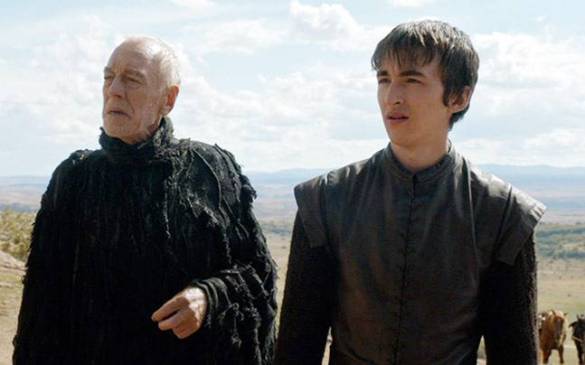 Okay, so, that was an exercise in delayed gratification.

Pluses, or, This Episode Was Actually Really Fucking Good

-No, really. It was. I’m usually pretty whiny about Game of Thrones episodes because, as we’ve discussed, I get really fussy if I don’t get constant answers and action and gratuitous shots of Daario’s butt or whatever. This was a great episode. Good job, show. Plus 7,000 points.

-Jon Snow managed to come back from the dead and even walk upright, and thankfully, his friends are there to welcome him with lukewarm hugs and steaming hot insults about his small dick. Plus 4,000 points.

-The Queen of Thorns is back and making jokes about incest, and we’re all better for it. Plus 2,000 points.

-We’ll get back to the whole flashback fakeout, but can we just appreciate how Young Ned Stark looked nothing like Sean Bean but sounded exactly like him? Also, the fight choreography in that scene was STUPID good. I could watch that over and over again forever, probably. Plus 5,000 points.

-Tyrion’s feeble attempt to play drinking games with Grey Worm and Missandei, neither of whom have cracked a smile once during this entire series, was such a welcome distraction from, well, everything else that happens on this show. Plus 800 points.

–Plus 10,000 points for that closeup of Shitty Olly’s dead face. BYE, FUCKER. (I was even happier to see him go than Alliser Thorne, really.) Also, Jon’s mic drop was welcome. I really need him to not be at Castle Black anymore. That being said, I think they really missed an opportunity to play AC/DC’s “Back in Black” when he walked out for the first time. Plus 5,000 more points.

-UGHHHH WHY why WHY why WHYYYYY did you bring us RIGHT TO THE BRINK of this Tower of Joy flashback and then cut away at the CRUCIAL MOMENT THERE IS ONLY SO MUCH I CAN TAKE OVER HERE and we were all SO CLOSE and YES this paragraph is an extended orgasm joke DEAL WITH IT AND MOVE ON MINUS 15,000 POINTS

-I’m not actually going to take points away for this but the Rickon thing MIGHT suck. I was really upset initially, but now I’m wondering if the Umbers are tricksy, especially because that direwolf head seems awfully small to be Shaggydog’s. I’m not giving points to the Umbers and I’m not taking away points for Rickon probably dying soon, because this can’t be wrapped up that easily. I don’t know.

This recap got off track because I have a sleep deprivation headache of some sort, but, this episode was actually so great, except for that huge tease which maybe made me throw something at the screen. (It is lucky for my television that my aim is terrible.) Hopefully next week we’ll be able to head back to the Tower of Joy, and if not, I’ll be here to complain about it for the rest of the season!