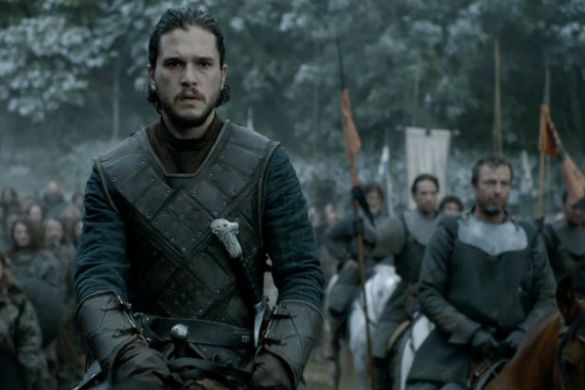 -I’m totally, totally shipping Yara and Daenerys and if you’re not, you’re garbage. Plus 6,000 points.

-Ramsay uses the word “bastard” like a homophobe uses gay slurs or tells people they “throw like a girl.” Plus 500 points for consistency.

-Davos is a pre-battle pooper. Good to know. No points, just noticing.

-Jon walks in on Melisandre continuing to sulk, which means her sitting by a fire staring into the flames, which I guess is the Red Priestess version of shoveling a pint of Ben & Jerry’s into your face while you watch old Kardashian episodes on Hulu. Not… that I have ever done that. My friends have and they’ve just told me about it. Plus 1,000 points.

-When they all arrive on the battlefield, I feel like the Boltons didn’t realize half of Jon’s army is literal cannibals, so when they saw the flayed men they were probs just like, “ooh, who brought barbecue?!” Plus 800 points.

–No points again, but I’m guessing there was NO disclaimer that said anything about “no animals being harmed in the making of this episode.”

-Okay. Let’s talk about this battle. There is very little I can say that hasn’t already been said – gorgeously shot, perfectly executed, gorgeously satisfying, nobody super important died (except, well, pour some out for Wun the Giant), there was a Deus ex Littlefinger, etc. I was flat out floored by how good this battle was, and I think it’s easy to say topping this is going to be nearly impossible for either Game of Thrones or, frankly, anything else ever. Plus 20,000 points.

-But let’s talk about the real hero of this battle. Sure, Jon was… there. More importantly, SANSA. She called Littlefinger. She saved the day. And when that goddamn day she destroyed was over, she fed Ramsay Bolton, her vicious, twisted rapist, to his own fucking dogs. Yes. Yaaaaassss yes yes. All hail the Queen of the North, Everything, the Universe, and my goddamned heart. Plus 50,000 points.

-Look, I’m all for the Starks, but as this battle began, their side was like a sparsely attended birthday party for an unpopular middle schooler. It made me sad. Minus 2,000 points.

-Aw, Rickon. Poor baby Rickon. Literally everyone except Jon, who, as usual, knows fucking nothing, knew that Ramsay thing was a cruel game and a fucked up trap, and you and your idiot half-brothercousin totally fell for it. Dammit. We barely knew ye, Rickon. Minus 5,000 points.

-That’s it. This episode was perfect.

Well, next week is the finale, and after it’s over, we will have finished our first Thrones season beyond the Wall/books, so we’ll see how that feels. Until then, we can all coast on this goddamned beautiful gem of a righteous, deeply satisfying episode. Cling to this feeling, guys. It definitely won’t last through next week. Until then.