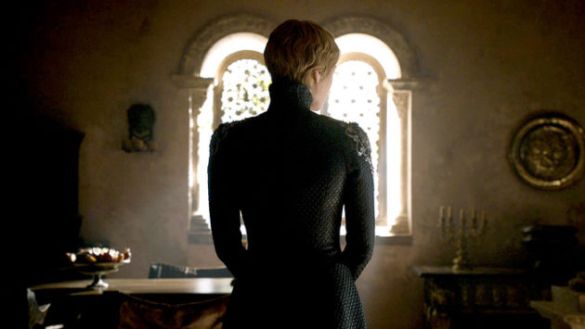 So, THAT ALL HAPPENED. Welcome to my last Game of Thrones recap of 2016, and we’re going out with a bang, several explosions, and lots of bloodshed, as it should be.

(And, yeah. I’m closing out the season with a Hamilton reference, because fuck you, that’s why.)

Pluses, or, What Comes Next?

-First of all, that opening was fucking majestic, with music by someone apparently named Ramin Djawadi who is definitely a genius underscoring our major King’s Landing characters preparing for what appeared to be a trial but was definitely a battle. Largely silent apart from the gorgeous score, it set the tone for some real throwdowns, and it inspired awed silence in my living room, which I can tell you is a pretty rare occurrence, because I’m a loudmouthed Italian and I mostly hang out with people who like talking. Plus 1,000 points.

-At first, I wrote in my notes that Cersei was wearing a “rejected costume from Beyoncé’s Formation tour,” but I’d like to rescind that. Beyoncé WISHES she had that chain. Plus 1,000 points.

-Nobody comments on Lancel’s forced punishment haircut, which is exactly the right thing to do when someone gets a shitty haircut and you don’t want to discuss it in case you sound rude. Plus 500 points for everyone in King’s Landing understanding manners.

-Of course Cersei, much like Lindsay Lohan, doesn’t bother to show up for her court date, so Bernie Sparrow is all, “hey Lancel, can you go Les Cousins Dangereux her, please?” Also, of course Lancel is too dumb to understand that he is definitely heading towards his own demise. Plus 300 points.

-When did Game of Thrones turn into Children of the Corn?!?!?! Plus 200 points for sheer terror.

-I don’t remember if Pycelle actually diddled kids – I mean, I know he was extra shitty to all of his kindly hookers – but his whole death scene just made me think of Frank Reynolds’ beauty pageant gone horribly wrong. Or right. Actually, right. Peace out, Pycelle. You were a gross fart human and nobody will ever mourn you. Plus 2,000 points.

-Also, who are these murder urchins who just show up out of absolutely nowhere to stab Lancel and Pycelle?! I’m serious. Someone help me out with this. I need information on these little Oliver Twists whose sole purpose is to stab everyone. No points, please clap.

-I should not have been SO surprised by this, but Cersei was NOT. FUCKING. AROUND. Naturally, Margaery, who is Cersei’s rival both in cunning and queening, is the first person to figure out that shit’s about to hit the fan, but it’s too little too late. Plus only 500 points, because surely nobody was sad to see Kevan, Mace, or especially the High Sparrow bite it.

-My whole living room actually, legitimately LOLed when they cut directly to #SadTommen staring out at his city in flames. No points. We’re cruel.

-Also, WHOA! Bye, Tommen! We literally barely knew you! To be fair, though, ditching the crown and swan-diving out a window was probably the best way to handle your mother murdering your bride and half the city’s population. No points, but pour some out for yet another fallen king and the last of the Lannister-Baratheon bastards. Prophecies are legit here, people.

-Cersei is evil. We all know this. Cersei is pretty much the worst. THAT BEING SAID, watching her torment Shame Nun and casually yell “shame!” on her way out of the room like Beyoncé singing “boy, bye” in “Sorry” was just THE MOST SATISFYING. Plus 1,000 points, and yes, I realize I’ve compared Cersei to Bey about a thousand times, but I’m fine with it if you are.

-I also wrote this in my notes: “Cersei is kind of like Alexander Hamilton but with 100% more murder.” No points, but just an observation.

-Also no points again, but damn, Benioff and Weiss – you just cleanly disposed of half your cast in one scene. There won’t be any death mysteries here. Everyone got blown up by magic fucking fire. Who are you even paying anymore?! Is the Brexit really hitting you guys that hard??

-Bronn asks Jaime if the cute, eyelash-batting wenches nearby aren’t “blonde enough” for him, but what he really meant was, “are they not related-to-you enough?” Plus 300 points because Bronn knows all.

-Hey, look! It’s the Citadel from Lord of the Rings! And the entry room to the entire thing is like the world’s worst and sassiest doctor’s waiting room of all time. I was half expecting them to tell Sam his copay didn’t cover the cost of his visit. Plus 500 points.

–No points because I’m just rude, but Gilly’s baby is still the derpiest goddamn thing I’ve ever seen, and Sam’s “winning smile” is… no.

-That Davos-Melisandre exchange was, honestly, the most uncomfortable episode of Law & Order: Special Victims Unit I’ve ever seen. All it needed was Ice-T storming in to read some chatroom messages out loud or Stabler yelling about his kids. (For real though, Liam Cunningham should win an Emmy for that.) Plus 1,000 points.

-The two remaining Stark siblings arguing about who should take Mom and Dad’s room was one of the cutest things I’ve ever seen on this show. Plus 800 points. Also, plus 500 points for them making #StarkJokes about winter actually BEING HERE. (Bonus from my living room chorus: “Fucking FINALLY. We’ve been waiting for winter for SIX FUCKING SEASONS,” courtesy of Mary, who is a hilarious and able sunchoke.)

-Queens stick together, and if Dorne was going to come into play at all, thank God it was because Olenna, Ellaria and Dany are teaming up. Also, Olenna was on fucking fire tonight. I guess losing your whole bloodline in a day really inspires grade-A sass in some people. Plus 5,000 points.

-Dany and Daario had what can only be described as the world’s chillest breakup, but please let this not mean Michiel Huisman is being completely written out. His butt gives me life. Plus only 500 points.

-However, that scene with Dany and Tyrion, which culminated in her naming him Hand of the Queen and them promising to be Golden Girls-style BFFs forever and exchanging handmade friendship bracelets (okay fine I imagined those last two things) gave me so many happy feels, so plus 8,000 points. Wait till they find out they’re related, probably!

-You know what else filled me with pure and utter joy? Watching Walder Frey get Titus Andronicus-ed by a servant girl who turned out to be none other than ARYA FUCKING STARK, who has definitely parted ways with sanity and/or reality but is also now basically The Bride from Kill Bill which is awesome so WHO CARES ABOUT MORALITY, AMMIRIGHT?! Plus 10,000 points.

-Speaking of tough-as-nails Stark girls, after all Sansa has lived through, she is now an atheist. Checks out. Plus 5,000 points. Also, way to brush off Littlefinger, who is literally your creepy uncle who won’t stop making a pass at you during family barbecues.

-And SPEAKING of Dany’s long lost relatives… AAAAAAAAAAAAAAAAAAAHHHHHHHZLKFJLKDFJLSKF’SDKFJALSKDJF’IWEJFDKFLDKFJLkj!!!!!!!!!!! R+L=J IS REAL! R+L=J IS REAL, EVERYONE! Let’s TALK about this for a second, or like, forever, or whatever works. So Bran, like all of us, is basically dying to know what’s up with the Tower of Joy, and so he heads back to the magic see-tree and reconnects with Young Ned Stark/NPH in a Wig, finally seeing the rest of this past vision. There’s Lyanna, in a pool of her own blood. There’s Ned, by her side. There’s her whispering in his ear, which you can barely make out but there are sentences like “his name is…” and “they’ll kill him” happening. There’s the “promise me, Ned” line we’ve all been waiting for. THERE’S HER BABY. HE CRACKS AN EYE. THEY CUT TO JON SNOW. IT’S ON LIKE DONKEY KONG. We don’t have total confirmation that his dad is Rhaegar Targaryen from the show yet but considering Rhaegar’s Kingsguard died to protect the baby inside the tower and considering we now know for certain that Jon is not Ned’s son, we can finally, FINALLY take this fan theory as honest-to-God canon. Chriiiiiiist, it feels so good. Plus 50,000 points. (If you are a slightly casual show-watcher or haven’t read the books or you’re my parents and need a refresher on R+L=J, go here or here.)

-Cersei may have lost a son, but she gained a throne, so in the end, I guess she got exactly what she wanted…? Plus 1,000 points for character consistency and for everything just being a matriarchy now.

-And speaking of new royalty, calling Jon Snow the King in the North feels like pretty bad juju considering what usually happens to the Kings in the North, but it’s a small victory and he’s already died once, so let’s take what we can get, shall we? Plus 5,000 points.

Minuses, or, There Aren’t Many

-Okay. Maybe I’m nitpicking, but how did Varys get from Dorne to Dany’s fleet that quickly?! Can he fly?? Did the dragons give him a ride?? Is he actually a merman??!? Minus 100 points.

-The worst part about this episode is that we now have to wait until NEXT FUCKING SPRING. GODDAMMIT. Minus 10,000 points for stupid things like “filming schedules” and “time slots” and “my own impatience.”

Total: 15,100 points / I honestly have nothing to bitch about

Well, we’ve hit the end of Game of Thrones‘ most adventurous season yet, where the show went rogue and blazed entirely new trails because they ran out of book and legitimately had to (which, let’s be realistic, George “Rnever Rwritesanything” Martin is just never going to finish).

But maybe going rogue turned out to be a good thing. The show has hit a new stride — it’s become weirdly feminist, it’s found extremely sure footing from a storytelling perspective, and it’s found the confidence to take huge narrative leaps and bounds without getting too confusing or over-the-top. We’ve heard lately that Benioff and Weiss aren’t interesting in prolonging the show — and the seasons are likely to get shorter as they wind down — but for me, I’m fine with that. I don’t want them to stretch things out into oblivion, because clearly, they do very well when given the freedom they were given this season. Big plot points happened with immediacy and urgency, and as a result, it was one of the most satisfying seasons of television I’ve seen in a while.

Mot importantly, though, we are starting to wind down, although down doesn’t seem like the right word — it just is clear that we’re heading towards a definitive endpoint. Dany is on her way to Westeros, Cersei is on the Iron Throne, and heads will roll soon enough, but unfortunately for us, we’ll have to wait a year for more closure. Game of Thrones might be gearing up to end, but there’s still a lot more episodes like this one coming our way before we get there.

For those of you who read these, a big thank you, and obviously, I’ll be back to keep recapping next year and back to American Horror Story in the fall. See you in 2017, nerds.