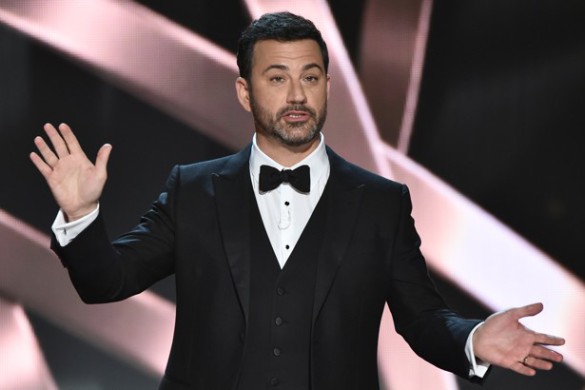 Well, another Emmys ceremony has passed us by, and therefore, we have to complain/cheer about it! Luckily, Brian, Ben and Nina are here to tell you what you should think about the entire telecast — specifically, who won, who lost, who SHOULD have won, how Jimmy Kimmel did, and obviously, some light sobbing about Sarah Paulson. Let’s roll.

Ben: Julia Louis-Dreyfus. Jeffrey Tambor. And now, Louie Anderson. What a weird and wonderful Emmys we got this year, an altogether surprising mix of old favorites and fresh faces winning awards left and right in a ceremony buoyed by an always jackass-esque Jimmy Kimmel.

Brian: Props to the Comedy winners for actually showing up to accept their trophies. Ay, Professor McGonagall? Anyway, I agree. I don’t watch Orphan Black or Mr. Robot, but it was awesome to see some first time nominees take the stage adorably fumbling with their electronic speeches and shoutouts to famous lines from their shows.

Nina: And it was equally wonderful to see nominees who have been on the ballot before take home trophies — while I can’t possibly begrudge Tambor or Louis-Dreyfus their repeat statuettes, watching Kate McKinnon’s eyes practically pop out of her gorgeous goddamned skull when she stood up to accept her Emmy was nothing short of magical. Watching Jill Soloway win again was delightful too, especially thanks to her call to “topple the patriarchy!” Seeing Key & Peele look adorable in tuxes AND win their first Emmy for the final season of their incredible sketch show was fucking delightful. Watching Sarah Paulson FINALLY WIN AN EMMY was LIT’RALLY a religious experience for me, and Sterling K. Brown and Courtney B. Vance’s perfect speeches capped off by Bey/Jay shoutouts were almost more than I could handle.

Ben: Sidebar; if anyone was going to beat Beyoncé for an Emmy, I’m glad it was Tommy Kail (Our Lord, Director Of Hamilton) for directing the technically-stunning Grease Live! From earlier this year.

Nina: That being said, while Game of Thrones got plenty of love for Benioff and Weiss between last night and the Creative Arts Emmys this past weekend, not a single actor was recognized, and I am a smidge cranky about that. Maggie Smith is great, sure, but come ON — give Lena Headey her first statue for her impeccable portrayal of Cersei Lannister (especially since she actually cared enough to show up), and frankly, Ben Mendelsohn’s victory feels like there was some sort of weird vote split that pushed the odds in his favor. PETER DINKLAGE 5EVER.

Nina: AND YET HE COULDN’T BEAT MENDELSOHN?! (Also lolz at the Emmys copywriters. Why don’t we have those jobs?!) Some people are calling for consecutive winners to take themselves out of the running like Candice Bergen did after her fifth Murphy Brown victory, but, I don’t know. That would deprive me of more delightful acceptance speeches from JLD. Speaking of speeches, can we speech about them??

Ben: I’m always for speeching about speeches. Rami Malek was the MOST charming in his speech for Leading Actor in a Drama, and I’m hoping we’ll see more of him. My personal favorites were probably John Oliver, acting as the Dad of the Emmys asking his staff to quiet down in the audience (He flew them all in from New York! He’s such a dad!), and Patton Oswalt, who we can all agree has had a tragic year, dedicating the award to his daughter, and his departed wife. And of course, Aziz Ansari and Alan Yang winning Best Writing for a Comedy Series and promoting Asian-American diversity wasn’t half bad either. Plus, Jill Soloway yelling “Topple the Patriarchy!” at the end of her speech? More of that, please.

Brian: All excellent choices, Ben. However, I have to bring it back to the Supreme herself, Sarah Paulson. While accepting her prize for The People v. Orenthal James Simpson (and naming her whole cast by their full names), she gave a beautiful tribute to her character AND date for the evening, OG Marcia (Marcia, Marcia) Clark. I loved that Sarah spoke about how, like the rest of us who only watched her iconic performance on the show, she got to know Clark for the real life gladiator she was in that trial.

Nina: Perfect Scandal reference, Brian. Before I move on, I want to briefly note that Angela Bassett is perfect and literally none of us are worthy, and that’s all I have to say about that. So, what did we think of Kimmel? Yeah, he made a lazy trans joke or two and seemed a little complacent about the proceedings overall, but I mostly thought he was… fine. He was just kind of, like, there. I know I’m biased because I think about him in the shower, but last year’s hosting stint by Andy Samberg felt fun and energetic to me — this one felt lethargic and a little phoned in, although the Bill Cosby gambit was certainly ballsy.

Ben: Last year’s Andy Samberg hosting gig was out there and weird and something that felt fresh and exciting. It would’ve been lovely to get someone exciting and progressive to host to like, you know, match the content that’s being awarded. Hosts like JImmy Kimmel are almost the butt of the joke these days (Hell, they even did the dumb typical “hopping through different shows” montage to open the show). Television these days is one of the more progressive entertainment mediums (more than movies, at least), and Kimmel felt like a retread in that regard.

Nina: Agreed all around, boys.

Brian: This was a fun show! And I appreciated the cameos from the uptown funky young stars of Stranger Things. We’ll surely be talking a lot more about them and that show next year!

Nina: 100%. Well, thanks for reading, friends! I’m actually going to WRITE that AHS recaps, Brian will be back with Grey’s Anatomy recaps for the first time on our site, and Ben will…. be Ben! Until next Emmys.