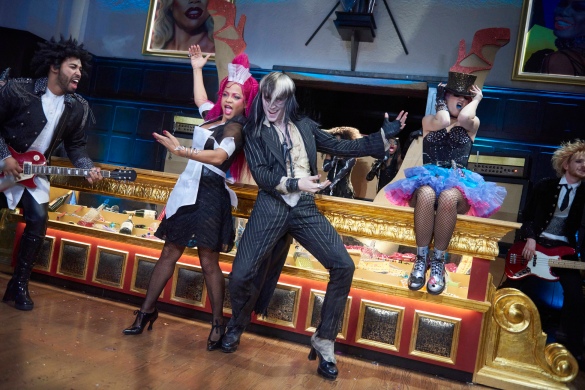 Earlier this year, Grease: Live was viewed by over 12 million people, made these shorts a thing and, most importantly, beat Beyoncé at the Emmy’s. Did Fox’s non-live follow-up to that uber successful musical extravaganza live up to the antici…………………………

When it comes to sophomore outings in this current renaissance for the genre, The Rocky Horror Picture Show: Let’s Do The Time Warp Again (yes, that is the official title) has VERY small shoes to fill. NBC’s Peter Pan Live! was a disastrous sequel to the also heinous but still highest rated The Sound of Music Live!.

Fox’s TV presentation of Richard O’Brien’s musical tribute to the B-horror/science fiction movies of his youth doesn’t ever sink to the lows we experienced in Neverland and Austria, but it never quite gets off the ground either. Sadly, it appears that magnificent technical/design elements on display here and a primetime network slot have watered down and washed away the countercultural integrity of the piece.

Before I go any further, I have to admit that I have never watched the 1975 cult classic film adaptation in its entirety. My only exposure to the property has been via a 2010 Glee episode and The Perks of Being a Wallflower. So, I was like half a virgin going into last night’s show.

Still, I was pretty familiar with O’Brien’s kinky, campy, and quotable score and script if not a rabid fan of them.

New fiancés Brad (Ryan McCartan) and Janet (Victoria Justice) experience some car trouble in the midst of a vicious storm, but a light “in the velvet darkness of the blackest night” leads them to a spooky castle. What happens once they enter basically boils down to the fact that (SPOILER ALERT!) everyone who lives at the Frankenstein place is an alien.

When master of the house Dr. Frank-N-Furter isn’t abusing her ignorant band of loyal followers (Reeve Carney, Christina Milian, and Annaleigh Ashford), she’s perpetrating her unique brand of weird science. On this night, she unleashes the titular Rocky Horror, a perfect muscle bound male specimen clad only in tiny gold shorts (Dothraki man meat Staz Nair). Trust among lovers is tested by the temptations of Frank and Rocky and the explosive entrances of Eddie (Adam Lambert) and his uncle Dr. Everett Scott (Ben Vereen). The zany action culminates at a lavish floor show that leaves all our characters “going home” in one way or another.

Wisely, Fox decided to incorporate the stage show’s Usherette (Ivy Levan) who watches the along with an audience singing, throwing popcorn, and Time Warping their hearts out. I love the attempt to immerse the at-home audience into the famous Rocky Horror midnight screenings, but it wasn’t used often enough or in different enough ways to elevate it above gimmick status. The only time I felt their interaction with the movie was authentic was when the crowd cheered for OG Frank-N-Furter Tim Curry as this version’s Narrator/Criminologist. If you watched, you know you did the same.

There were a lot of questions and think pieces generated by the casting of Orange is the New Black star Laverne Cox in Curry’s signature role, but I would be surprised if her performance and her out-of-this-world wardrobe leaves anyone with the ability to speak. She is sassy and silly, but not quite sinister. Her clothes don’t wear her, but I think six-time Tony winner William Ivey Long’s sexquisite costumes deserve tons of credit for their ability to dazzle where Cox, her co-stars, and the network sometimes fizzle.

As a Columbia very reminiscent of Cyndi Lauper, Ashford’s every punchline lands like a knockout. Lambert’s very brief appearance included a well-sung, super energetic rendition of “Hot Patootie” and an awful death scene that surely embarrassed everyone who was involved.

All in all, Let’s Do The Time Warp Again  was certainly more rocky than a horror to watch. Director/choreographer Kenny Ortega (High School Musical franchise, Hocus Pocus) can obviously craft a crowd pleasing musical in his sleep. But maybe that’s the problem. He dreamt it, but this show never had the chance to fully be it.