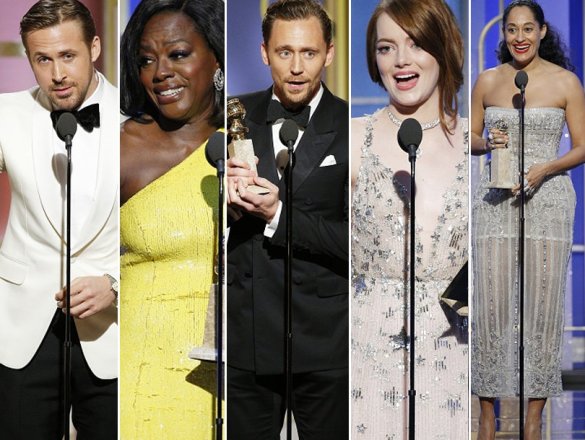 Well, the Globes have been given out, and we’re here to applaud, argue with, scoff at, and revel in some of the finer points of last night’s Golden Globes telecast. Join Brian and Nina for their commentary on the 2017 awards, Meryl Streep dragging Trump, Viola Davis’ perfection, and whatever the hell The Night Manager even is.

Nina: Well, last night was a very, very mixed bag – at least for me. First of all, Jimmy Fallon was hosting, so for me, that’s an automatic low, and his immediate panic at his non-functioning teleprompter was really all we needed to know about him. (The opening, frankly, was tolerable because it relied heavily on La La Land jokes, more talented stars, and Justin Timberlake, which is the only factor that can ever make Fallon bearable.)

Brian: Yeah, I definitely had to check my ‘tude in the middle of the ceremony because the Globes did what the Globes do best: screw with everything we think we know about the awards season (unless you’re Casey Affleck or The Crown). For the most part, though, the surprises were more confusing than exciting (especially if you’re Isabelle Huppert). Seriously, WHAT is The Night Manager and can he find those “Hidden Fences”?

Nina: THE SHEER RACISM, BRIAN. I CANNOT HANDLE IT. Jenna Bush Hager fucking that up was one thing, because, sure, but come on, Michael Keaton. You can’t be that drunk. Also, I will personally give $5,000 to anyone who can tell me what Goliath is. Gauntlet thrown, reader(s).

Brian: Everyone can agree that the most heinous injustice perpetrated during the night (besides that super racist, super un-funny Sofia Vergara-doesn’t-know-English bit) was Aaron Taylor-Johnson of Nocturnal Animals winning over the awesome Mahershala Ali of Moonlight. Ali has won virtually every Supporting Actor prize in town, while Taylor-Johnson has barely received any nominations. What does this mean for the SAG and Academy Awards still to come? Even with the Best Picture Drama prize secured (yay!), are Ali and Moonlight as a whole in jeopardy ?

Nina: Yeah, that shit was WAY out of left field. Everyone knows Tom Ford movies are just shiny, shiny magazines put on film. (Well, I did like A Single Man. But whatever.) Moonlight did get MAJORLY overlooked, while La La Land is… well, just fill your Oscar ballots out now if you want to win, I guess.

Brian: Yup because, after taking 7 out of 7 of the trophies it was nominated for, La La Land became the most winningest film in Golden Globes history. I only truly take issue with one of writer-director Damien Chazelle’s two personal wins. He should be disqualified from contention in the Screenplay category because the title of his movie might be the MOST annoying three word phrase anyone has ever had to type in the history of civilization. Forget the backwards alphabet thing, police officers should make you type La La Land to check your sobriety. Try it yourself. See how easily it becomes LAla Land  or lalala Nd.

Nina: And as someone who writes and watches everything with a glass of wine (or whiskey, let’s be honest) in hand, this is ESPECIALLY aggravating to me. Fuck right off, Chazelle. That being said, I’m half thrilled for Justin Hurwitz, a relative newcomer and winner for Score and Song… and also now am VERY CONCERNED about my boy Lin-Manuel Miranda’s EGOT chances going forward. (Yes. This is a real concern in my life.) That aside, while I can’t really argue with either of the acting awards for Lalalalaland (fuck it, I’m literally drinking wine right now), I… kind of wish Ryan Reynolds had won for Deadpool?!? Discuss.

Brian: Reynolds should’ve realized that only actresses win awards for getting naked in movies before he showed us (albeit with a poorly lit fight scene) just how lucky his wife Blake Lively is **eggplant emoji**. Honestly, I was fine with either Ryan winning here, but I know what you mean. This could’ve been the kind of upset that would’ve left us feeling anything but. The true winner, though, was Hacksaw Ridge nominee Andrew Garfield who…wait for it…locked lips with Reynolds when Gosling went up to accept the award. If you blinked, you missed it, but fortuntately the internet came to the rescue and the gay shipping began.

Nina: OH, YES. I was not mad about that. NOT MAD. So let’s discuss some of the triumphs of the night, especially in the Black Excellence field. Tracee Ellis Ross! Donald Glover! Atlanta! FUCKING VIOLA, BRIAN. Was she made in a lab to deliver perfect speeches? I… what.

Brian: We all knew it was going to happen, but WE WERE NOT READY. Davis echoed our outrage that she was winning her first Globe on her fifth nomination, but kept it super classy as usual. I was also very thrilled about Atlanta. The show is a prime example of the adventurous and unorthodox storytelling happening on the “small” screen nowadays. Donald Glover is the shit, but he’s not too cool to recognize the magic of his show’s wins.

Nina: It’s time to talk about Meryl, though. Like, as if she’s Kevin in We Need To Talk About Kevin.

Brian: I LOVED all the tea she spilled up there. This was not the time to tell a traumatic story about her wig in The Bridges of Madison County or to make fun of Pierce Brosnan’s singing in Mamma Mia!. She took full advantage of this precarious moment in history and her captive, tweet-happy audience. I most appreciated how overall her extremely eloquent speech underscored the importance of the right and responsibility of free expression. They are things we all share no matter where we come from, where we end up, or what we do while we’re there.

Nina: Meryl won a lifetime achievement award last night and used her five minutes to beautifully, perfectly drag the President-elect without ONCE mentioning his name, and she did it to encourage empathy and freedom of the press. Legit, Meryl is a queen, and actually nobody ever is worthy. Ever. (Except Viola.) The silence in the room was deafening and spoke volumes, and I’ll admit I shed some tears over that speech. The woman knows what’s important, and with people like her, we’ll get through the next four (PLEASE, FOUR) years. Plus, now that Trump has called both her and Hamilton overrated, I can’t wait to see who earns that title next. It’s basically the next iteration of a Kennedy Center Honor.

Brian: Before we go, we do have to congratulate mine and Nina’s spirit animal Sarah “Lana Banana” Paulson who stuck the award season landing by picking up a Golden Globe for her iconic work as Marcia Clark in The People v. OJ Simpson: American Crime Story. Unlike LaLA LAn d, I’ll NEVER get tired of typing her praises.

Nina: Can Sarah be friends with Meryl already? I mean, damn. If Taylor Swift can have a squad of mediocre models, why can’t Meryl, Viola, Sarah and like, Amy Adams go to a dive bar and shoot darts and cheap brown liquor together? (Sorry, I’m just copying down an entry from my dream journal.) Anyway, unsurprisingly, the Globes were drunk, messy, confusing, and absolutely no indicator of anything to come, although I frankly wish Questlove/Julia Louis-Dreyfus imitating Questlove would DJ everything on television from now on.

Brian: As long as Questlove leaves Fallon at home, I’m good. The only positive thing that Jimmy did last night (negatives included rapping and impersonating Chris Rock, thankfully not at the same time) was make me feel A LOT better about another Jimmy’s (Kimmel, that is) Oscar hosting gig in a couple of months. Kimmel can’t possibly be worse, right?

Join us leading up to the Oscars at the end of February as we cover the nominees, write some Best Picture Profiles, and gear up for the Movie Superbowl while ignoring the regular Superbowl! Stay tuned!