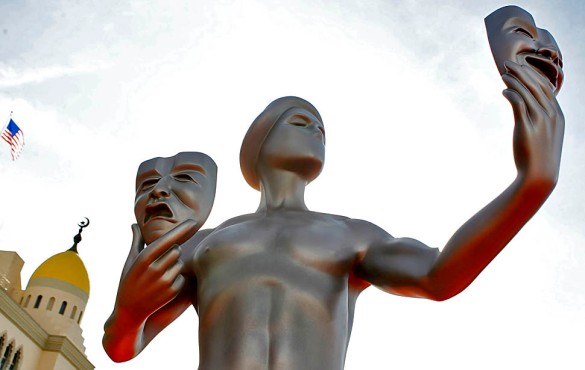 But really, why do all these award statuettes have to be nude?

“Listen up, Fives, a Ten is speaking!” is what the Screen Actors Guild says to all the other film guilds (Directors, Producers, Writers, etc.) when it comes to predicting the winners of the Academy Awards. The acting branch of the Academy is the largest voting block so the results of the SAG Awards are a good indicator of how those same actors will fill out their Oscar ballots. The SAG ceremonies have NO host, NO performances, and seemingly NO alcohol on hand so they’re really on must-see TV if you’re as big of an awards nerd as me. And, if you’ve read this far, you probably are, so stay tuned for my predictions for who WILL win and who SHOULD win one of those hunky, mask-holding statuettes.

Ensemble, Comedy Series
Will Win: Blackish
Should Win: Orange is the New Black

Blackish is officially getting too good for awards folk to ignore, but OITNB had its best season EVER. But really as long as Modern Family or Big Bang don’t win, it’s cool.

While I fear that Stranger Things is being deemed too “genre-y” to be more than an awards nominee, it seems that The Crown checks literally all the boxes to be a major awards magnet. It gon sweep.

Male Actor, Drama Series
Will Win: John Lithgow, The Crown
Should Win: Sterling K. Brown, This Is Us

Sterling K. Brown deserves this simply because he isn’t going to win for The People vs. O.J., but John Lithgow is on The Crown (and really good as Churchill) so he got this. Maybe for season two Lithgow can use this and all the other statues the show wins as Churchill’s cane.

Don’t feel too bad for Millie Bobby Brown (is she related to Sterling?). If she doesn’t win, she could definitely just take award from whoever does with her bad ass telekinesis.

Both of these comedy dynamos don’t have nearly enough (any?) statues for the great work they’ve done. I’ll be fine if either wins. But Tituss sings a lot, so that’s really all you need to do to impress me.

Ellie Kemper brought the human drama to her typically wacky performance on Kimmy, but sadly she’s up against JLD. Veep is slaying the game to a ridiculous degree right now. Uzo Aduba has won twice, but, for once, she was not the sole tragic center of this season of Orange. RIP [SPOILER]. (By the way, you’re welcome for not spoiling that)

The Internet is telling me Riz Ahmed is going to win, and that’s after the Globes told me that Courtney B. Vance is no longer a lock for this category after his Emmy win. So, I’m just jumping on all the band wagons here.

What can I say about Sarah that Nina and I haven’t crazily texted each other in ALL CAPS? She is 1,000,000% going to win her 1,000,000th prize for this show. But there’s really no better time for a tie to happen so that she and Audra can share the stage and discuss how brilliant they each were.

Literally the only one of the nominated shows I’ve seen.

Best ensemble ever? Maybe. Best of this year? Without a doubt. If by some chance Moonlight does not take this top prize, you can probably kiss its chances for the Best Picture Oscar goodbye. And that would really fucking suck. Manchester, Hidden Figures, and Fences are also VERY strong, buuuuut no, it’s Moonlight for sure.

I smell a backlash brewing. Two to be exact. Casey Affleck’s sordid past is quickly and surely catching up to him, and actors are maybe the only group brave enough to deny him an award. Some people are for sure getting sick of La La Land, but how can actors deny Goslings’ and Stone’s  characters’ (unrealistic) starving artist narratives? Answer: They can’t.

I can’t say more because, if I do, I’ll get upset all over again about Amy Adams not getting an Oscar nomination for Arrival. I LITERALLY CANNOT!

Although I haven’t seen Hacksaw Ridge or Jason Bourne, I’m just going to assume that Civil War is the best movie in the bunch here. And why the hell is Nocturnal Animals nominated? The only stunt involved in that movie was done by the audience: Not falling asleep.

Tune in to the Screen Actors Guild Awards airing this Sunday January 29th on TBS & TNT!