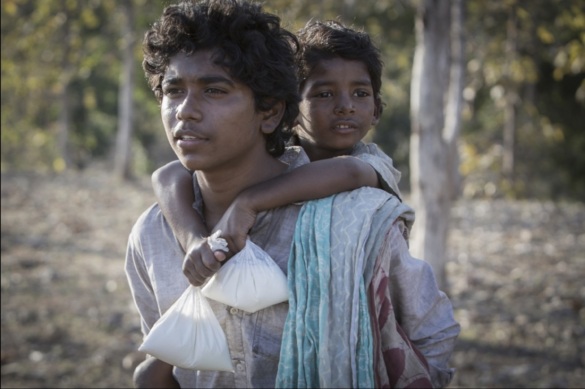 As we come closer to the Academy Awards on February 26th, we’ll be posting short profiles of each Best Picture nominee, attempting, in our own ways, to not only sum up what the movie is about, but why we believe it scored one of the nine coveted nominations, and why it could possibly take home the big prize come Oscar night. Enjoy!

I will not spend this whole profile objectifying Dev Patel. I am here to deliver the hard facts of award show prognostication. It just so happens that one of those facts is that Dev Patel is one of the most gorgeous humans ever nominated for an Oscar.

All jokes aside, Lion is a powerful and visually exquisite film. It is written and directed by a pair of Australian newcomers—Luke Davies and Garth Davis, respectively. Prior to Lion, Davies is probably most well-known as an award winning poet. Davis is making his directorial debut with the movie (a feat for which he won a Director’s Guild Award). How then are both these men Oscar nominees in their fields for a Best Picture hopeful?

Harvey Weinstein is a prolific producer/film distributor nicknamed “The Oscar Whisperer”. His resumé boasts previous Best Picture recipients including The Artist and The King’s Speech. Other recent projects like Fruitvale Station and Philomena never truly materialized as major winners despite receiving oodles of buzz and nominations. Seemingly in an effort to reverse those fortunes, he serves up one of this year’s most awards-friendly movies.

Based on Saroo Brierley’s  A Long Way Home, an inspirational autobiography. Young Saroo is separated from his family in India after falling asleep on a train to Calcutta. His inability to overcome the language barrier there lands him in an orphanage. Eventually, Saroo is adopted by an Australian couple. They provide him with everything he never had. Guilt over his sudden privilege festers in him into adulthood. As a tenacious twentysomething armed with the newly-invented Google Earth, Saroo embarks on an epic (map)quest to reclaim his history and culture.

Features a gifted, diverse ensemble. There’s Oscar winner Nicole Kidman, who surely secured her nomination with one breathtaking speech she delivers about her choice to adopt. Fellow nominee Patel has fully come into his own as an actor with this role. He’s a little weepy throughout, but his authentic, passionate work anchors the movie’s last two acts. As young Saroo, Sunny Pawar lights up the screen with that thousand-watt smile and adorable running stride. He exudes an inner strength and wisdom reminiscent of Quvenzhané Wallis in Beast of the Southern Wild.

Lion made a pretty great showing at the BAFTA Awards, winning for Supporting Actor and Adapted Screenplay. Greg Fraser took top honors from the American Society of Cinematographers.  Unfortunately, as with many races on Sunday, the competition seems too great for every deserving movie to get recognition. Juggernauts have been established, and I don’t believe Lion has the momentum to topple them even with Harvey in its corner.

It’s a solid film with excellent components that tells an important story. The fact that there are objectively so many of those this year (Hidden Figures, Hacksaw Ridge to name a few) makes us, the viewers, the real winners.