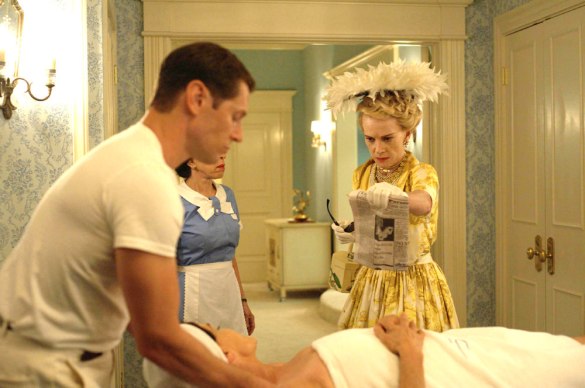 Thank Beyoncé that Bette and Joan aren’t alive to witness my tardiness with this recap. It’s unclear to who(m) the episode’s title “The Other Woman” is specifically referring to, but what is very clear is how incredibly obsessed I am becoming with this show.

Pluses, or Whatever Happened to Baby Sally Draper? Eh, Who Cares?

-I fear that I’m going to sound like a broken record when it comes to talking about “The Other Woman”. All the great things about the pilot are still great or even greater this week, including the title sequence. As opposed to last week when the opposite was true, this time during the credits, Susan Sarandon’s name appeared on screen first before being literally nudged off by Jessica Lange’s. It was a small detail, but it creatively depicts the shifting power dynamic between the divas on the show. Plus 2,000 points.

-This week, the award for Most Improved in the category of Characters Not Getting On My Nerves goes to…La La Land…I mean…Alfred Molina as Robert Aldrich. This episode really dove deep into his character and unearthed a surprising amount of inner-conflict and (occasional) compassion. While I certainly don’t condone his complicity with Jack L. Warner’s moustache-twirling misogyny, I honestly felt a pang of sadness watching Aldrich’s face fall as he was beginning to come to terms with his flailing film career. I believed that genuine concern brought him to both Bette and Joan’s houses when they called for him in the middle of the night. And it was palpable guilt that left him unable to face his wife when he returned home at dawn after a drunken tryst with Bette. Good stuff, Molina and the writers. Keep it up! Plus 5,300 points and a gold star.

-Kiernan Shipka slaying once again. This week, she read Bette for filth. Joan’s attacks on Bette’s age and beauty get under her skin, but B.D.’s truth bombs about Bette’s mothering abilities pierce through to her heart. Plus 900 points.

-Watching Jessica Lange womanhandle that stubborn Pepsi machine and her loser husband with equal amounts of ease and venom was a thing of beauty. Plus 150 points.

Total: 25,350 points/The weight of Joan’s prop Oscar, which I really hope is one of Jessica Lange’s real Oscars

-Ugh! Jack L. Warner is the WORST. He has maybe only one or two scenes this episode, but we learn a lot about his character, and none of it’s good. It seems that he is pretty much responsible for the animosity between Bette and Joan. To punish his cantankerous star Bette, Warner brought Joan over to his studio (after she quit MGM) and gave her all the roles that typically would’ve gone to Bette. Furthermore, he uses Aldrich who uses Hedda (whose journalistic “integrity” makes Rita Skeeter look like Robin Roberts) to fan the flames of the feud by spreading ridiculous rumors in the press. This was all in the service of provoking the cattiest performances from Bette and Joan on set. Of course it works, even after Bette and Joan conspire to get their young bimbo of a co-star fired from the movie. He’s a huge dick (probably endowed with a tiny dick), and, sadly, Stanley Tucci’s charming DILF-itude doesn’t prevent me from loathing Warner entirely. Minus 80,000 points.

-Never thought I’d type this, but…Hedda’s hat—the one in the picture above, to be exact. It resembles a white feather boa that died on a serving platter. Hedda seems to be testing her posture by balancing it on her head. And the costume designer is testing my patience. Minus 24,000 points.

-Bette’s weird song. I haven’t seen Baby Jane (I ordered it last week and I’m currently waiting for it to be delivered to my local library) so I don’t know if it alludes to a big moment in the movie. And I don’t care. It was way less effective in setting up the romantic and sexual tension between Bette and Aldrich than the scene they share at Bette’s house. Minus 1,200 points.

Yeah, that’s really it for my negatives. This episode was pretty much a slam dunk.

Next week, it looks more shit is going to hit more fans while Bette and Joan continue to be and look incredibly fabulous. Yes, I am implying that they’re so flawless that they’d look amazing while literally covered in shit. Don’t lie. You know you’re imagining it now too. You also know that I’m right. Ciao, friends!