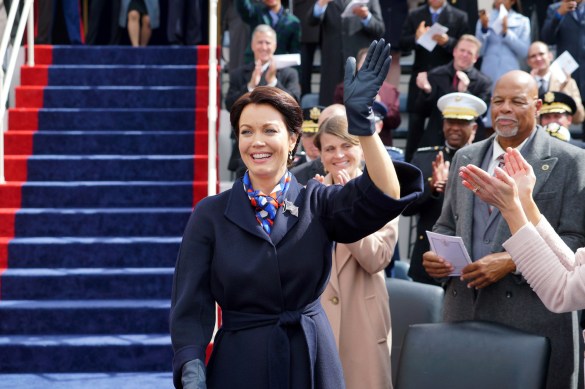 Only when it comes to Scandal is seven an unlucky number.

If you haven’t heard that the Shonda Rhimes-created political thriller soap is coming to an end next season, you either live under a rock or, like me, you’re just in denial. But, until that sad sad day is upon us, there’s one hell of a two hour season finale to unpack. Let’s dive right into all the killer mama drama of “Tick, Tock” and “Transfer of Power”!

Pluses, or Move Over Geena Davis, There’s A New Lady President On ABC!

-By the far the most painful and poignant moment of the night was Mellie’s appeal to Olivia to follow through with the public inauguration despite the assassination threats. She talked about all the women who would be traveling and watching from around the country and the globe to witness the very first woman be sworn in as President of the United States. Earlier, Mellie explained to Fitz how, instead of dream wedding, she always fantasized about the day she would become Commander in Chief. While I’m not a huge fan of how Mellie ended up in the Oval, she definitively proved that she deserved to be there by looking at and showing everyone else the bigger picture. If only life were more like Scandal…said no one else until now. Plus 100,000 points.

-You know you’re a hardcore Olitz shipper if you squealed as high as I did when Olivia ran across the lawn and made out with Fitz before he flew away to Vermont. Even with all the cameras flashing in the background, their love shined the brightest. Plus 700 points.

-Start engraving the Emmy for Guest Actress in a Drama for the phenomenal Khandi Alexander now. She’s been putting in truly excellent work since season 3, but tonight, she outdid herself. She broke Papa Pope and the hearts of millions with that monologue about happier times for the Popes. She’s an emotional chameleon turning fierce, fragile, murderous, or maternal depending on her environment. I was terrified when I thought that Eli shot and killed her, but I should’ve known better. Shonda’s always thinking of the bigger picture too. Prequel spin-off with Khandi and Yara Shahidi reprising her role as Young Olivia, anyone? Plus 30,000 points.

-I’m going to play Fashion Police for a bit with the Inaugural Ball. As far as my favorites are concerned, it’s clear that black is the new black. Quinn and Olivia slayed in their exquisitely tailored black gowns. The men all looked dapper AF in their tuxes as well. Plus 6,000 points.

-Quinn’s pregnant! I really enjoy her and Charlie’s relationship, and I’m glad that Quinn is giving them a chance to be the best parents they can be, North Korean contacts and all. She’s a natural leader for OPA, and her straight outta Target throw pillows are…something. Plus 4,300 points.

-“Right.” Olivia’s response to the question of how it feels to be the most powerful person in the world. Damn straight. Plus 3,000 points.

Minuses, or Too Many Red Herrings

-Commercial suck in general, but these two were bleak. First, there was the ABC remake of Dirty Dancing, which looks a hot 80’s mess. I’m familiar enough with the original to semi-confidently decide that this “television event” appears to be a cheap knockoff. (Look out for my review next week.) The second was the preview of the newest Shondaland production, Still Star-Crossed. The show is basically Feud: Montagues and Capulets following the double suicide at the end of Romeo and Juliet. Sadly, they don’t even get that right! Rather than stabbing herself, Juliet takes a lethal shot of poison right after Romeo does. On last week’s Scandal, people were carrying around a human head in a box. I think we can handle some light stabbing in the name of love. Minus 3,500 points.

-You may think that President-elect Frankie Vargas was the biggest casualty of this season, but you’d be wrong. That dishonor goes to…the likability of Abby Whelan. She was easily manipulated by Peus and scary ponytail lady and was deservedly bitch slapped by Olivia for it. Abby wants to be a badass monster like everyone else, but she is nothing but a sheep in wolf’s clothing. Seeing her working with Huck, Quinn, and Charlie at the OPA offices should’ve made me all warm and nostalgic, but I, like the characters on the show no doubt, will never fully trust her again. Minus 12,000 points.

-Now for my least favorite Inaugural Ball outfits: Luna Vargas’ weird spider web-looking applique, Abby for being herself, and Mellie’s evening look which featured a bolero and a disappointing lack of train. Minus 300 points.

-If Huck doesn’t stop making sad puppy eyes every single time Quinn and Charlie have a sweet moment together, I’m going to pull his teeth out! But then again, he’d probably enjoy that… Huckleberry Quinn is dead. Let it go, man! Find a woman to sleep with so we can have our villain for next season. You’ve proven time and time again that that’s your type. Minus 900 points.

-So, I guessed a little bit before the big reveal that it was in fact Luna Vargas who masterminded everything, but I’m not satisfied with that outcome. She put her plan into motion after Cyrus apparently inceptioned her with the idea that a President is most powerful on the day they’re elected and the day they die. Luna thought she could do a better Jackie O than Natalie Portman and carry on her husband’s legacy. She seemed to forget that Jackie didn’t have to murder JFK to do good work on his behalf. Olivia staging Luna’s suicide was also kind of ridiculous, but I cackled at way her hand shot up when she did an informal poll of who in the room had killed a vice president. Minus 20,000 points.

The TGIT hangover was realllll this morning. Season 6 was a real return to form for Scandal, and I have no doubt that things will come to an even more satisfying, dark, and twisty conclusion this time next year. And, if anyone wants to discuss that literally lit episode of Grey’s, leave me a comment.

Until next time, Gladiators!!!