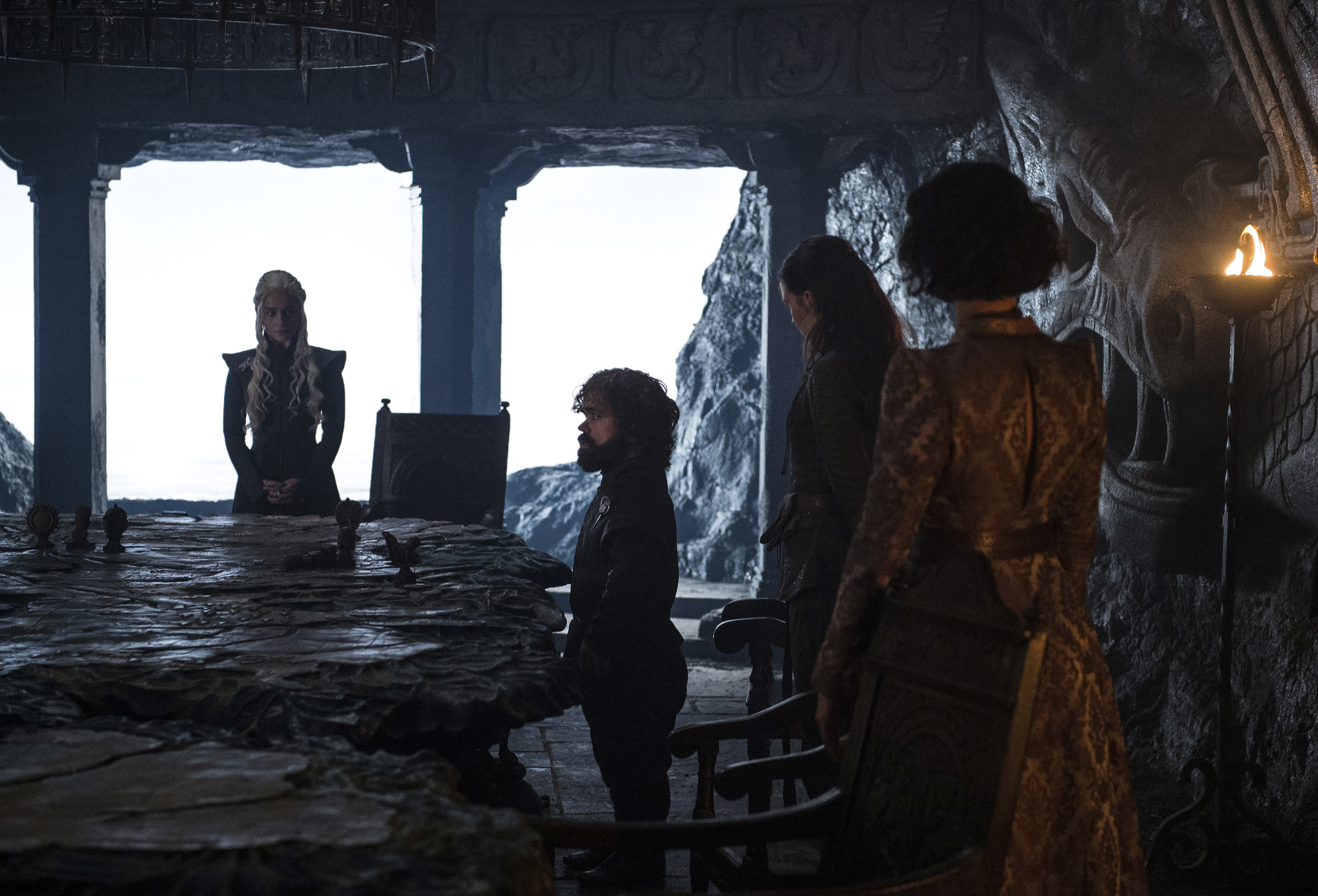 Another week means another episode of Game of Thrones, which also means gratuitous butt shots, stuff blowing up, Littlefinger smirking, and Daenerys being one of those girls who skimmed Lean In once and has been annoying about it ever since. Shall we begin?

-Dany’s Island of Misfit Toys is looking good, guys. In one corner you’ve got Yara, the steely-eyed, sexually fluid would-be queen of the Iron Islands. In another, you’ve got my main bitch Olenna Tyrell, wearing her best mourning chic and full of incredibly sassy rage. In another, Varys, that Buddha-looking possible merman whose alliances change more than Trump changes press secretaries, and his counterpart, Tyrion, who almost made me cry when he said he would give Dany his ancestral home, Casterly Rock. Theon is also there. These motherfuckers are in it to win it. (Even though, you know, they immediately do not win it. We’ll come back around to that.) Plus 5,000 points.

-Missandei pointing out the Azor Ahai translation error is borderline mouthwatering, but like, wouldn’t that be really dumb and obvious if that was the answer all along? Like, surprise! The hero is the hero! Come on. No points yet.

-Okay, even though this Missandei-Grey Worm scene has been built up for way too long and honestly should have happened about two years ago, it was still pretty hot, especially – ESPECIALLY – Grey Worm’s butt, which is the replacement for Daario’s butt I was hoping for. Per Brian, “Grey Worm? More like Grey Peach Emoji.” Move over, Kim. Plus 2,000 points. Also, plus another 500 points for him going directly downtown. He’s a keeper.

-Jon is on his way to see and perhaps try to bone his aunt Daenerys, which is fantastic. Sansa is basically Queen of the North, which Littlefinger will definitely, absolutely fuck up for her somehow. Brienne is still there refusing to make eye contact with Tormund, probably. Arya seems to be on her way there after an informative meeting with her old friend Hot Pie (“I’ve made a few pies myself” hehehehe). FINALLY, stuff worth giving a shit about is happening at Winterfell. It’s been forever. Plus 2,000 points.

-LOL BYE SAND SNAKES I’m never, ever, EVER going to miss you, EVER hahahahahahah plus 10,000 points

-That final scene was a classic Thrones surprise, and despite it being the greatest lesbian cockblock (clitblock?) of all time, I loved it. Plus 800 points for keeping us on our toes, as always.

Minuses, or, There’s Still One, Right?

-Fucking Theon, dude. Way to pull a complete Kate Winslet and strand your sister out on the ocean without a plank to grab onto. (Yes, Yara is Leo in this comparison, and I think that’s more than fair.) We’re not certain of Yara or Ellaria’s fate, but I can only hope that Euron let them ladybone it out before killing them, if that’s what we’re working with here. Minus 1,000 points.

-I AM NOT HERE FOR THESE CITADEL CUTAWAYS. I have a really strong stomach, but honestly, they are RUINING all food for me. First stews, now pies? What’s next, some disgusting cutaway involving fries?! Is nothing SACRED to these people??!? Minus 2,000 points.

-We all know the deal. Show us Grey Worm’s goddamned dick. Or at least what’s (maybe not?) there. Minus 1,000 points.

-I’m gonna go ahead and call bullshit on Qyburn’s supposedly genius dragon crossbow contraption. Dragons move around a lot and are giant and breathe motherfucking fire, so that perfect headshot he showed off? That would never work. Also, there are THREE of them. Think about this for more than five seconds. Really. Minus 5,000 points.

–Minus 4,000 points for this episode being… I don’t know, a little scattered. It felt kind of unfocused, which is not a feeling I want Thrones episodes to have in their second to last season. No plotline got enough screentime to really feel fleshed out, and I know, I know, we’ve got to build to stuff, but still. I guess I just want perfection from every episode until the show ends. It’s really simple.

Points to YOU if you can tell me why this recap title is a double reference. (Can you tell I’m proud of myself?) See you next week, for a hopefully tighter episode.