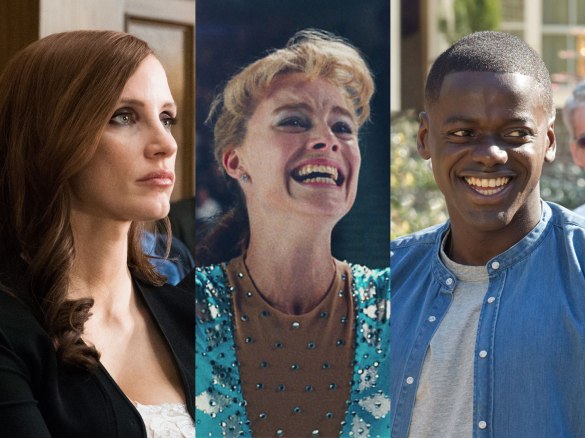 Nina: Brian, I am incensed. Livid. I feel personally victimized by many of the snubs AND some of the nominations simultaneously. I know the HFPA is literally always drunk, but this year feels weirder than ever already. These nominations are straight trash. Yeah, I said it.

Brian: I know, right? With some of the downright preposterous inclusions and omissions on that list, it’s seems like they were craving all the backlash headlines that have been all over my feed. I’m not sure which of the seemingly record amount of snubs is the most egregious. What say you?

N: This is easy. Despite the ridiculous number of egregious (YES, MY FAVORITE WORD) snubs, the worst is easily, EASILY the white dudefest that is the Best Director category. Somehow, Christopher Nolan edged in there for his largely forgotten war epic, Dunkirk, and Ridley Scott snuck in too for All the Money in the World, which nobody but the HFPA has even seen but which gets brownie points for its swift and merciless de-Spaceyfying. Missing from this category? Lady Bird’s Greta Gerwig, Get Out’s Jordan Peele, and Call Me By Your Name’s Luca Guadagnino, all of whom will hopefully be among the Academy’s picks. Gerwig at least made it into Screenplay, but I think overall, I’m angriest about Get Out’s exclusion from all but two categories, particularly Screenplay. Was it REALLY worth it, HFPA, just to make sure that Aaron Sorkin could add another nomination to his Wall of Glory?!

B: All the Money in the World is an accurate title for the movie since that’s clearly what the producers gave to the HFPA to steal that director spot for Ridley Scott from Gerwig, Peele, Guadagnino, Patty Jenkins for Wonder Woman, Dee Rees for Mudbound, Sofia Copp… I could literally go on ALL DAY! It’s amazing that Mexican filmmaker Guillermo del Toro got the nod for helming the most Globe-nominated film of the year, but it’s equally troubling that rather than lift up the eligible and worthy women and people of color to show their support for the marginalization of those groups, the HFPA chose to reward Scott and Christopher Plummer for replacing Spacey. Good for Michelle Williams for getting in the Lead Actress Drama category for ATMITW, but given the movie’s nonexistent buzz before the Spacey shit hit the fan, I have a really hard time believing any of these nominations are justified.

N: Honestly, so little of this makes any sense to me. I mean, there’s a tiny bit of good here. I’m thrilled for Daniel Kaluuya, Timothee Chalamet, Saiorse Ronan, Armie Hammer, and a ton of other well-deserved candidates in the movie category. I’m also, um, terribly excited for… Golden Globe nominee The Boss Baby, which is a thing that we have to say now. So that’s great. But let’s talk TV for a second — cause the weirdness does not end in film. Right, Brian?

B: Definitely! I made the mistake of applauding TV side for honoring female-lead and universally excellent shows like Feud, Big Little Lies, and Insecure. Then, I realized that they left off the undisputed champion of Lead Actressing in a Comedy Series, Julia Louis-Dreyfuss. I know that we all are sometimes prone to a healthy eye roll when it comes to her awards dominance, but I don’t understand denying her even a nomination in a year where she announced her breast cancer diagnosis, delivered the feels on this post-Clinton loss season of Veep, AND received a shout out from everyone’s favorite real life Veep, Joe Biden.

N: Absolutely ridiculous. The Comedy category is, in fact, a giant mess — as opposed to Drama, which is filled with the usual suspects, Comedy is doing that dumb Globes thing where it favors brand new shows still currently airing their first seasons that, you know, nobody is watching. Is anyone watching SMILF?! I liked The Marvelous Mrs. Maisel, but come on. It’s not better than Veep, it’s certainly not better than The Good Place, and its lead, Rachel Brosnahan, doesn’t deserve to beat out Louis-Dreyfus, Rachel Bloom, AND Gina Rodriguez for a Best Actress nomination. The Globes has this bizarre habit of nominating people and even handing them trophies — Bloom, Rodriguez, and Andy Samberg fall into this category — and then never nominating them again, ever. Also, if the world were just and fair, Manny Jacinto and Darcy Carden from The Good Place would have all the trophies forever. Also, if Jessica Biel wins anything I’m definitely going to kill myself.

B: And, while this season Game of Thrones had its off moments, it’s ludicrous to not recognize any of its enormous and enormously talented ensemble cast, real or CGI.

N: Correct. No Peter Dinklage, no Lena Headey (come ON), and no Emilia Clarke, who’s finally figuring out how to act and everything. Oh, and while I’m bitching about Drama nominees, even though there’s literally no way she’ll win, there is also no way that Katherine Langford from 13 Reasons Why is better than ANYONE ELSE EVER. No. Jesus Christ. You couldn’t do better than that, HFPA?!

B: While we’re on the topic of head scratchers, let’s talk about The Greatest Showman… Oh wait, we can’t? Why not? Oh yeah…no one’s seen it! Weird expect when you consider the proven fact that the Globes will literally nominate any big cinematic musical for Best Picture just for existing. Unless of course it’s the biggest box office hit of the year a.k.a. Beauty and the Beast. We all love Hugh Jackman, but his latest project is no La La Land (still hard to type) despite having songwriters in common. Pasek and Paul are again among the Best Song nominees, this time for The Greatest Showman’s anthem “This Is Me”. That category might have a ton of big music stars like Mary J. Bilge (also a surprise acting nominee for Mudbound), Mariah Carey, and Nick Jonas but is no less boring and weird than every other race this year.

Ugh… As you can tell, it’s pretty difficult for either of us to find the positive in this confounding list. Unfortunately, today’s announcement of the Screen Actors Guild nominations did little to elevate any particular film or performance to legit front runner status as well. Please let us know if you’re able to find a silver lining in crop of Golden Globe nominees.

Also, make sure to tune in to NBC on January 7th at 8PM when the always hilarious and delightful Seth Meyers hosts the 75th annual Hollywood Foreign Press Association Tour de Franzia!