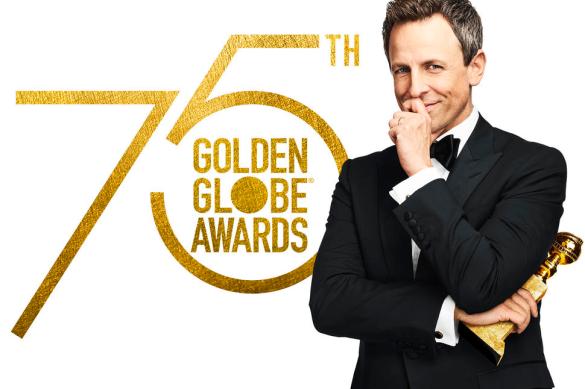 Best Picture, Drama & Musical/Comedy
Will Win: The Post (Drama) & Lady Bird (Musical/Comedy)
Should Win: Call Me By Your Name (Drama) & Get Out (Musical/Comedy)
Nina: With all of the genre confusion happening this season (yes, there were parts of Get Out that certainly got a laugh, but I wouldn’t call it a comedy per se), it’s an odd season, but as far as the film categories go, the HFPA usually plays it fairly straightforward. The Post‘s timeliness won’t go overlooked, and unless they inexplicably award Greatest Showman simply for being a musical, Lady Bird is sure to prevail. As for the “should wins,” our favorite movies of 2017 both have an okay shot.

Best Actor, Drama & Musical/Comedy
Will Win: Daniel Day-Lewis, Phantom Thread (Drama) & James Franco, The Disaster Artist (Musical/Comedy)
Should Win: Timothée Chalamet, Call Me By Your Name (Drama) & Daniel Kaluuya, Get Out (Musical/Comedy)
Nina: Chalamet is still definitely a contender – and should win for the closing credits sequence alone – but with Day-Lewis supposedly retiring after yet another phenomenal performance in Phantom Thread, he may end up with the edge. Franco’s showy, pitch-perfect depiction of Tommy Wiseau, coupled with the fact that he might ask Wiseau to accept the award with him, may push him to the top of the pack, but I’m desperately holding out for Kaluuya, whose powerful, gut-wrenching performance in Get Out has made him an enormous star.

Best Supporting Actress & Actor
Will Win: Allison Janney,  I, Tonya &  Sam Rockwell, Three Billboards…
Should Win: Allison Janney, I, Tonya & Richard Jenkins, The Shape of Water
Brian: The only person who would understand how difficult it is to choose between the two superb and layered portrayals of overbearing mothers delivered by Janney and Lady Bird‘s Laurie Metcalf is Meryl Streep’s Sophie herself. Janney’s character is pretty much another version of Mo’Nique’s monster in Precious, so I’m expecting her to get all the awards to match. Sam Rockwell is the presumptive front runner for the Supporting Actor Oscar, but there’s a chance that the small but vocal racist backlash against his movie and his character in particular could derail his chances. I preferred Jenkins’s movie, but The Florida Project’s Willem Dafoe is equally deserving of the win.

Series, Drama & Musical/Comedy
Will Win: The Handmaid’s Tale (Drama) & The Marvelous Mrs. Maisel (Musical/Comedy)
Should Win: The Handmaid’s Tale (Drama) & Master of None (Musical/Comedy)
Brian: Not allowing The Handmaid’s Tale to pick up this top award to match it’s Emmy for Best Drama would be the most tone deaf thing that the HFPA has done since nominating The Tourist. That being said, I’m not going to hold my breath that they’ll do the right thing here. As for Comedy series, the Globes really love plucking small streaming shows from obscurity by giving them the gold. Look for …Mrs. Maisel to pull a Mozart in the Jungle-level upset over the pitch perfect sophomore season of Master of None.

Limited Series
Will Win: Big Little Lies, Nicole Kidman, Kyle McLachlan
Should Win: Big Little Lies, Nicole Kidman, Jude Law
Nina: Literally, do I even need to explain this? Just give us another speech from Witherspoon, Dern and Kidman to brighten this cold weekend. Or give it to The Sinner just to confuse your audience. Whatever. Expect Nicole Kidman to, obviously, take home Best Actress in a Limited Series, and as for Actor, Jude Law for The Young Pope seems like an appropriately weird HFPA choice.

Best Actor, Drama & Musical/Comedy
Will Win: Freddie Highmore, The Good Doctor (Drama) & Anthony Anderson, Blackish (Musical/Comedy)
Should Win: Jason Bateman, Ozark (Drama) & Aziz Ansari, Master of None (Musical/Comedy)
Brian: The Good Doctor is the This Is Us of last fall’s television season, so the HFPA will probably want to award it somehow. Freddie Highmore also has the added advantage of, through his work on the ABC ratings juggernaut, busting the myth that people with autism are any less capable than those without it. Again, I can’t say enough about how fantastic Master of None is. I’m hoping that someone acknowledges that Aziz Ansari’s writing is not the only award-worthy contribution he makes to the show.

Best Supporting Actor & Actress
Will Win: Laura Dern, Big Little Lies & Alexander Skarsgård, Big Little Lies
Should Win: Ann Dowd, The Handmaid’s Tale & David Harbour, Stranger Things
Nina: Though this is definitely the Year of the Dern and Big Little Lies seems poised to execute its same Emmys sweep, this honestly is anyone’s game, and despite my unabiding love for both Skarsgård and Dern’s performances, Ann Dowd has reached the peak of an incredible career as Aunt Lydia in The Handmaid’s Tale, and David Harbour deserves a reward (with a sure-to-be excellent acceptance speech) for his thoughtful, gorgeous work in Stranger Things‘ sophomore season.