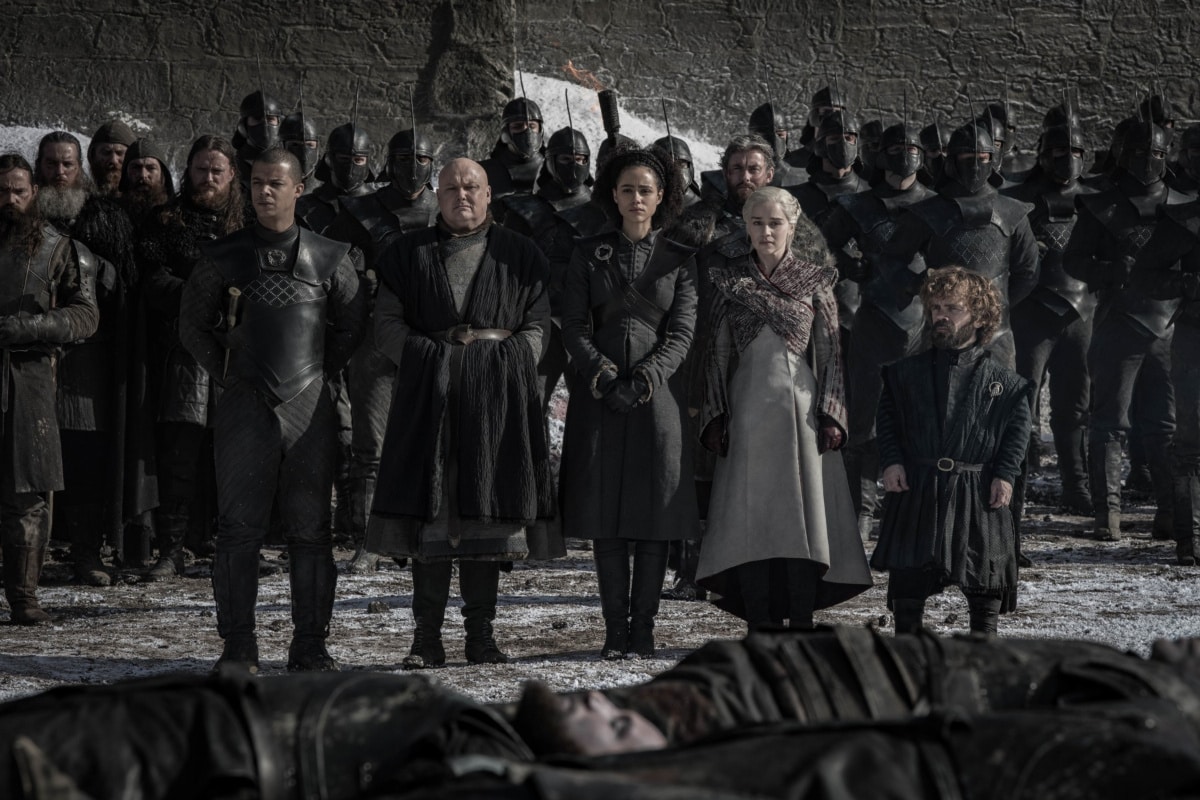 Well, uh, yeah. I have a lot of feelings about “The Last of the Starks.” Basically none of them are positive.

Pluses, or, I Guess These Things Were Okay

-I liked that Arya did not immediately accept a marriage proposal from a dude she slept with a whopping single time, because that would be gross and not a thing Arya would ever do. Plus 5,000 points.

-I liked that Sansa clearly learned from Littlefinger and told Tyrion a valuable piece of information. Plus 2,000 points. I also like that Tyrion told Varys because he is consistent and now the three least stupid people on the show can maybe make something not stupid happen. Plus 2,000 points.

-Ghost appeared in this episode.  Plus 800 points.

Minuses, or, Everything Else was Bad

-Jon did not even pet his faithful direwolf goodbye before pawning him off on his friend Tormund as the ginger wildling heads North, because this show’s budget allows for endless lattes and hours of dragons, but god forbid they have a brief scene where a guy with a man-bun pets a dog for literally ten seconds. Minus 500 points.

-I hated the buildup to Brienne and Jaime’s love scene, in that I hated that Tyrion’s formerly fun drinking game was ultimately used to shame Brienne so that Jaime basically pity-banged her, and I really, really, really hate that Ser Brienne of Tarth, a Knight of the Seven Kingdoms who once bit a man’s ear off during a fight just because she could, stood around in a bathrobe and cried over a man. Minus 5,000 points.

-I’m taking more points because ultimately Brienne’s sexuality is treated like a complete joke and that just makes me so incredibly angry. This episode was written by dudes who definitely ranked women on a scale of one to ten in college. Minus 3,000 points.

-And speaking of that man! Jaime has spent six fucking seasons redeeming himself and the second he remembers his twin sister has a functioning vagina and a penchant for feigning helplesness, he LEAVES?! Is… are… what?! Are you all kidding me?!?!? Minus 5,000 points for all of the italics this episode is making me use.

-Love that line where Sansa is like, “no, it’s good that I spent years getting raped and brutalized, because it made me stronger.” Did I say love? I meant hate. I hate it with every fiber of my fucking being. Goddammit. Minus 8,000 points.

-What is even happening with this Bronn thing? He wanders into Winterfell (how?) completely hammered (why?) with a crossbow (excuse me?) and kind of yells at and vaguely threatens Jaime and Tyrion without being serious IN THE SLIGHTEST and leverages the whole thing for a castle but also acts like he completely hates two dudes he’s friends with? What the fuck is going on? Minus 3,000 points.

-I know that time and space and time have totally stopped mattering on this show lately, but are we really going to pretend that Daenerys and Company got to King’s Landing in like fifteen minutes even though the whole plot of the early seasons is that it took anyone forever to get anywhere, ever? Minus 300 points because, honestly, this is the least of my concerns.

-Okay. Let me just… grapple with this. Daenerys has dragons, which are extremely powerful and super fast. Daenerys can fly around on said dragons and is usually on one of them. While on said dragon, Daenerys somehow did not see an enormous armada beneath her? Also, let’s reiterate: Daenerys has dragons. Cersei has a pirate who has finally perfected his liquid liner. Dragons are really hard to kill, yet Cap’n Smoky Eye manages to take down a dragon within five seconds after which Daenerys flies right at said armada for no reason? Can ANYONE CLEAR THIS UP FOR ME PLEASE MINUS 10,000 POINTS WHAT THE SHIT IS EVEN HAPPENING

-Did I mention this episode was definitely written by two dudes who probably roll really limp, floppy, terrible joints? Minus 1,000 points.

-Wow, love that journey for Missandei, the show’s sole remaining woman of color, where she is half-freed from slavery only to become a well-treated but glorified servant and then finally secure her post-war happy plan only to be put back in chains, used as a pawn, and then executed just to make sure Daenerys buys a one-way ticket to Crazytown. Wait. I keep misspelling “hate.” I HATE THIS!!!!!!!!! Minus 10,000 points!!!!!!!

-Have the people who wrote this episode of Game of Thrones ever actually WATCHED Game of Thrones, or were they too busy catching up on old episodes of World Series of Poker where they already know who wins? Minus 2,000 points.

-What is there even left to say about this coffee cup debacle? I’m both mad AND disappointed! Minus 1,000 points.

-The tone of this episode was all over the place and the more I think about it, the madder I get, because WE ONLY HAVE TWO EPISODES LEFT AFTER THIS AND I FEEL BETRAYED!!!!! Minus 3,000 points oh my god I’m so worried

As you can see, this might be the lowest point total in the history of my recaps, but with only a few episodes left, I’m not pulling any punches. Between weird tonal shifts, character un-development, and just a general lack of concern about any single thing that’s ever happened on this show, I was very angry about this episode, and I take solace in the fact that I’m not alone. Maybe they’ll redeem themselves next week, but I can’t pretend I’m not concerned. In the meantime, we can all wish this episode took place entirely in a child’s snowglobe or some shit, and we’ll all just start over next Sunday.