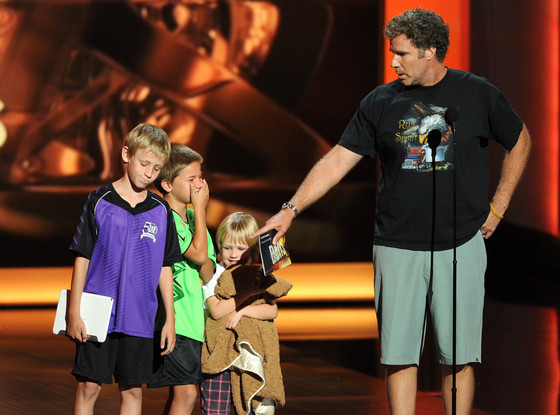 Nina: Where do I start? The individual In Memoriam tributes made the telecast feel like a very awkward funeral, there was an interpretive television dance set, inexplicably, to “Get Lucky” in the middle of the show, and it looked like somebody had shot my beloved NPH with a tranq dart before things even got started. But you know by now who won, so let’s talk about the fact that almost EVERY SINGLE WIN was some kind of upset.

B: Yeah, I watched the first half hour, and they definitely need to make sure whoever wrote those “jokes” for NPH never works in Hollywood again. But I digress, as you said, very strange set of winners last night. Or rather, winners that went against the typical Emmys trends that have been set up in the last few years, starting off with Tony Hale beating all three Modern Family nominees in Best Supporting Actor in a Comedy Series.

N: The Tony Hale win was one of my favorite moments of the night. He was so earnest and gracious, and I’d like to imagine that he was partly being rewarded for Buster Bluth’s overall perfection. His in-character moment with Julia Louis-Dreyfus was also really excellent- following her up to the podium, holding her purse, and whispering sweet nothings in her ear, just like Gary would do. But right before that came Merritt Wever, who was so upset by her upset that she kind of ran off stage with one of the shortest and sweetest Emmy speeches ever. She seemed really happy to win, which was sweet, but I’m still bummed that Jane Krakowski was never rewarded for all the crazy shit she did on 30 Rock… especially because Nurse Jackie is less a comedy than a really depressing show with characters who make quips sometimes.

B: She was so genuinely overwhelmed, it was really adorable and humbling, honestly. And I think Hale’s Veep performance really stood on its’ own outside of his AD fame. I’m really happy for him! And for Julia Louis-Dreyfus. I was honestly suspecting a surprise Veep win for Best Comedy Series. But those are dreams that were crushed by the end of the night.

N: We’ll get there. I love watching JLD and she is absolutely one of the funniest women working today- her track record in comedy speaks for itself. I’ll admit I was sad to see Amy Poehler continue to go home empty-handed though. Leslie Knope gets funnier and better every year, and Poehler is already a legend in her own right. And by the way, don’t anybody get excited, because fucking Jim Parsons won again, and he has three Emmys, and Jon Hamm and Amy Poehler have none and nothing feels right anymore.

B: It’s not just that Jim Parsons won, it’s that Jim Parson won when he was nominated alongside Louis C.K. and Alex Baldwin, who both did magnificent work on their respective shows this season! As I said previously, Parsons is a fine actor on a horrid show, while C.K. and Baldwin are great actors on GREAT shows! It really boggles the mind. I’m just going to stop paying attention to this category until The Big Bang Theory goes off the air.

N: I mean, at a certain point during the telecast, you were practically in better company if you got robbed of an Emmy. The working theory on Jeff Daniels’ totally confusing and horribly wrong win for Leading Actor in a Drama is that the voters were so split between Hamm and Cranston that somehow Daniels emerged the victor. Bobby Cannavale does fun things on Boardwalk Empire, but he seemed surprised to even be INVITED to the telecast. After TEN YEARS of victory and a particularly excellent season where they changed hosts and kept the quality consistent, the cast and crew of The Daily Show were unseated by their own spinoff, The Colbert Report. Laura Linney beat Jessica Lange, who should have won an Emmy just for her “Name Game” number. And, an underlooked but especially egregious highway robbery, was Ellen Burstyn (wearing a nightgown) beating Sarah Paulson for Supporting Actress in a Miniseries, after Paulson’s career-making turn on AHS: Asylum this past fall.

B: Let’s add to that list The Voice winning for Best Reality Series, which is usually just a throwaway prize given to The Amazing Race. I do like it when awards shows change their game up a little bit, but the Emmy voters just seemed off their rockers last night. And it’s so interesting how the major winners aren’t really the shows that are changing the game on television……but then Breaking Bad finally won Best Drama Series, so I don’t know what to believe.

N: In terms of the strength of their most recent seasons, my personal opinion is that it was down to Game of Thrones and Breaking Bad for Best Drama, since the other shows didn’t give their strongest showings. I might not watch, but it was nice to see Breaking Bad take it home since it never has before, and two other pieces of TV genius, Homeland and Mad Men, have won in the past for superior seasons. But, then again. Modern Family. Why. Whywhywhy.

B: I was so assured that the Modern Family train was losing steam, but nope, they pulled through and got that Best Comedy Series Emmy. This is why I love watching and talking about awards show, but really don’t put too much stock in them. The Emmys, especially, haven’t really been embracing the “Golden Age” of TV like you think they would. It’s taken Breaking Bad five years to win the Emmy, and who knows if they’ll even win next year for a season which, in my opinion, is better than the one that won this year. Side note, props to Anna Gunn for finally winning for Best Supporting Actress in a Drama Series. Such a lovely performer. But I digress, the Emmys are doing their best to keep their fingers on the pulse, but they’re still off by a few beats.

N: It’s depressing, year after year, to watch the Emmys reward traditional sitcoms (Jim Parsons, Modern Family) over shows that are trying to change what television is and what television can be. But it’s always been this way- Frasier consistently beat Seinfeld for Best Comedy, and Jerry and George never beat Kelsey Grammer for any acting Emmys. And one more acting win note from last night- yeah, Claire Danes is really really really good on Homeland, but it would have been nice to see Kerry Washington take home a historic Emmy as the first black woman to ever win as a Leading Actress in a Drama. Maybe next year? Probably not though because as long as Claire Danes is on TV she’ll keep winning Emmys.

B: Looking forward to seeing next year’s Emmys where Breaking Bad’s final season is nominated, Orange is the New Black will be contending, and Neil Patrick Harris will be far, far away from the proceedings.

N: And someone give Jon Hamm and Amy Poehler some Emmys, please! Maybe Amy could win… while she and Tina are hosting… hmm…