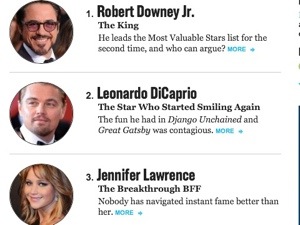 Yes, I know that I really only link to Vulture, but in all fairness, Vulture is my hero. Anyways, this week they released their yearly list of the 100 Most Valuable Stars, with a few other lists explaining how they calculate such a thing, who fell off the list from last year (condolences to Blake Lively, Jaden Smith and Gwyneth Paltrow, which is probably the only time those three people will be mentioned in the same breath), and who they expect to see in next year’s rankings (what up, Anna Kendrick and Michael B. Jordan!). Really interesting stuff, you guys, if you’re a nerd like me and want to see actors analyzed like they’re stocks. Shut up, seriously, it’s fascinating!!

(Above are the top three. Don’t act so surprised.)